Iranians in Protest Zones Can’t Get Online. This is What They See Instead
May 17, 2022

Iranwire – At 2.50pm on Friday, May 13, an Iranian would-be internet user in Khuzestan opens u…

Plea to the International Community: End the Silence on State Brutality in Iran
May 17, 2022

Iranwire – Workers and drivers of the Tehran Unified Bus Company slammed the brakes on Monday,…

Unidentified Man Executed for Murder in Mashhad
May 17, 2022

Nationwide protests in Iran as food prices increase
May 17, 2022

Iranian Convicted Of 1992 Murder Of Dissidents Calls For Pressure On Sweden To Release Nouri
May 16, 2022

RFL/RE – Kazem Darabi, an Iranian sentenced to life in prison over the 1992 murder of four Ira…

Reports of Two More Killed as Protests Spread to Northeast Iran
May 16, 2022

Iranwire – Demonstrations continued across Iran on Saturday, May 14. Local sources have identi…

All Football Matches in Iran Closed to Spectators
May 16, 2022

All Football Matches in Iran Closed to Spectators

Protests Continue in Iran Despite Security Crackdown
May 16, 2022

Spokesperson: Iran’s Foreign Minister to Visit UAE on Monday
May 16, 2022

VOA – Iran’s top diplomat is expected to visit the United Arab Emirates on Monday, the I…

Lethal state crackdown on food protests in Iran amid internet blackouts
May 16, 2022

Violent Crackdown of Protests in Iran: International Community Must Act
May 16, 2022

Violent Crackdown of Protests in Iran: International Community Must Act

USCIRF Calls on Iran to Remove Restrictions on Golrokh Iraee Following Release from Prison
May 15, 2022

The EU and the Biden Administration Give in to Iran’s Mullahs
May 15, 2022

gatestoneinstitute.org – The European Union is basically admitting that it views the nuclear d…

Visit To Iran By Controversial UN Rapporteur Provokes Concerns
May 15, 2022

RFL/RE – For the first time since 2005, Iran has allowed a United Nations special rapporteur t… 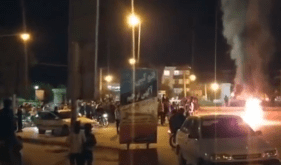 Canadian-Iranian sentenced to prison for conspiring to export military gear

Al-Arabia – A Canadian-Iranian man was sentenced Friday to 32 months in prison for violating US sanctions against Iran.

Al-Arabia – An Iranian blogger granted asylum in Israel has been questioned by its Shin Bet internal security service on suspicion of illegal communication with Iran, an Israeli official said on Friday.

Al-Arabia – The two missiles fired at Mecca and Riyadh Airport in late July and early November bore the trademark of the Iranian ‘Shahid Bagheri Industries’ which is already on the sanctions list of the United Nations.

CHRI – An imprisoned trade unionist, Reza Shahabi, has been denied hospitalization despite suffering a stroke, according to a statement by the Union of Workers of the Tehran and Suburbs Bus Company (UWTSBC) published on December 14, 2017.

Al-Arabia – A threefold increase in the departure tax proposed by the government has prompted outrage among many Iranians. The proposed hike is part of the administration’s new budget plan for the upcoming fiscal year, starting March 21, 2018. President Hassan Rouhani submitted the draft budget to parliament Dec. 10, but the controversy surrounding the document may prevent its approval.