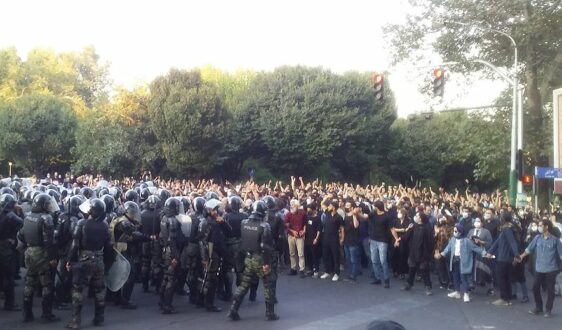 “Death To The Republic Of Executions:” Overnight Protests Rock Tehran, Other Iranian Cities

Iranwire – Iranian protesters took to the streets of Tehran and other cities across the country overnight, shouting slogans against the Islamic Republic, despite a ferocious crackdown on dissent that has killed hundreds of people.

Footage shared on social media shows hundreds of residents of the capital’s Ekbatan neighborhood chanting slogans such as “Death to the dictator” and “Death to the republic of executions.”

They also chanted in support of protesters in the two provinces of Sistan and Baluchestan and Kurdistan, where the state clampdown on more than four months of anti-government demonstrations has been particularly intense.

Ekbatan has been a hotspot of public anger in Tehran, with many residents being arrested by the security forces.

In the west of Tehran, people blocked a road in Ponak neighborhood and chanted “Death to the republic of executions,” “This year is the year of the blood, Seyed Ali is overthrown” and “Death to Khamenei,” in reference to Supreme Leader Ali Khamenei.

Residents also gathered on their balconies to shout slogans against the Islamic Republic.

Similar rallies were held in several other neighborhoods of the capital city.

In the northern city of Karaj, protesters shouted that Iran “will not” move toward progress until the “mullahs are in power.”

Residents of Dehgolan, in Kurdistan Province, were also out to voice anger at Iran’s clerical rulers.

The authorities have cracked down hard on the nationwide protests triggered by the September 16 death of a 22-year-old Kurdish woman, Mahsa Amini, in the custody of Tehran’s morality police.

Security forces have killed more than 500 people, including dozens of children, and detained over 18,000, human rights activists say.

Around 20 people have been handed capital punishment in connection with the protests. Four of them have been executed so far amid international outrage.

Many detainees have been handed long-term prison sentences.