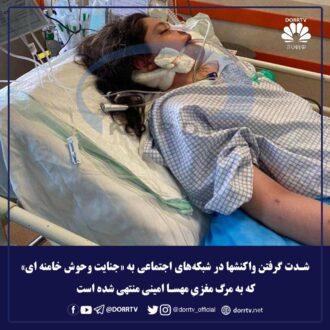 RFL/RE – The lawyer of the family of Mahsa Amini, the 22-year-old girl whose death in mid-September while in police custody has led to months of nationwide unrest in Iran, says the primary investigator has failed to adequately probe the case and has urged them to blame medical personnel for the tragedy.

In an interview with the Faraz website, Mohammad Saleh Nikbakht, the lawyer for the Amini family, said that four months after Amini’s death, “incomplete investigations have been carried out without [the family’s] presence or participation as the complainant.”

Amini was detained by the morality police while visiting Tehran in September because she was allegedly wearing a head scarf, or hijab, improperly. Iranian authorities say she died of natural causes, but eyewitnesses and her family say the young woman was beaten by security agents.

Nikbakht called on investigators to study the two-hour period of Mahsa’s arrest and transfer to the Morality Police Center instead of pushing him and Amini’s family to accept the “late arrival and failure” of the medical staff as the cause of her death.

“In less than two hours, 95 percent of the vital signs of this young woman were lost, and Mahsa was taken to the hospital like a dead person,” Nikbakht said, adding he was speaking out even though security officials have forbidden him from participating in any interviews with domestic or foreign media.

Amini died on September 16, prompting thousands of Iranians to take to the streets nationwide to demand more freedoms and women’s rights. The widespread unrest, which continues, represents the biggest threat to the Islamic government since the 1979 revolution.

Nikbakht said that Iran’s judiciary has not handed over investigation documents or the hospital report to the family. He said the Kasra hospital, where Amini died, prepared a 500-page report that includes the opinions of various doctors, including the doctor in charge of resuscitation, but that the judicial authorities did not hand over this report to doctors representing the Amini family.

Protests over Amini’s death have been met with a violent government crackdown.

The activist organization HRANA said that, as of January 15, at least 522 people have been killed during the unrest, including 70 minors, as security forces try to stifle widespread dissent by detaining thousands, including several foreigners.