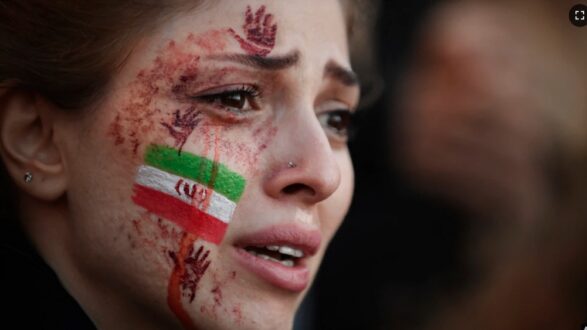 VOA – When Aida Ghajar saw a tweet that a young woman was in a coma after being taken into custody by Tehran’s morality police, the IranWire reporter immediately contacted her sources to try to verify the information.

Within hours, she had a name: Mahsa Amini. Her contact also provided the phone number of someone inside the hospital. Ghajar confirmed the name with two others, then called the number. It was Kiarash, Mahsa’s brother, on the line.

“I’ve had his voice in my head for the past four months,” Ghajar told VOA. “He was distraught. He said, ‘I have nothing to lose and I’m gonna tell everyone in Iran what’s happened to Mahsa.’”

Despite personal risk — the hospital was filled with police and talking to foreign media is considered a crime in Iran — Kiarash insisted that his name and his sister’s be published.

At the time, Ghajar had no idea the story would become so huge. But as news of Amini’s death spread, protests erupted across Iran. Four months later, they are still taking place.

“It’s a paradoxical feeling, because on one hand, it’s history; now the world understands what kind of political regime they are,” Ghajar said. “On the other hand, so many people are in jail, so many people are changing their lives, so many families don’t have their children now. I know everyone’s talking about, ‘This time it’s different’… but at the same time, it’s a tragedy.”

Ghajar, 40, was born just a few years after the revolution and grew up under the Islamic regime. She recalls her father telling her: “Don’t read the newspaper. You shouldn’t read books. You shouldn’t go outside. You should be at home because this political regime, they can kill people.”

Still, Ghajar said, her generation is different: They are willing to stand up for their rights, even if it means going to prison or into exile, something she knows all too well.

When, at 18, she became pregnant, Ghajar left Iran because of the social and familial stigma she felt in a society that prohibits sex outside marriage. Ghajar said she felt she had nothing left to lose, a sentiment she said any woman in Iran can relate to.

In 2009, after protests broke out over a disputed election, Ghajar, who was working as a reporter in Lebanon, received word that the Iranian regime had put her on a list of journalists “against God” — a crime in Iran — and had called for her deportation and arrest. With the help of the nonprofit group Reporters Without Borders, Ghajar moved to Paris, where she felt safer.

Even in exile, Ghajar has kept a pulse on Iran, first as a freelance reporter, and now with IranWire, working with sources inside the country to verify information and make sure news gets out.

She and others at IranWire have a “circle of trust” with sources inside the country and in exile.

Although much information can be found on social media, every video, photo or document must be verified. Ghajar and her team conduct interviews, dispatch citizen journalists inside the country, and consult with lawyers and doctors to make sure the information is accurate.

Masih Alinejad, a VOA Persian host who also lives in exile, agrees that social media has become a valuable tool for covering Iran.

“The people don’t have weapons, but they have their mobile phones and the social media through which they use to spread news,” Alinejad told VOA via a messaging app. “The social media is our battleground because the Islamic Republic controls all media inside Iran and uses its propaganda to disseminate its lies.”

Trying to get the message out carries serious consequences.

Since the start of the protests in September, 92 journalists have been imprisoned, making Iran the top jailer of journalists around the world, according to the Committee to Protect Journalists, a nonprofit organization in New York.

CPJ senior researcher Yeganeh Rezaian, an Iranian journalist who lives in exile in the U.S., said that despite the risks, her sources have been proactive, eager to share information about their colleagues and family members.

“The government will do whatever it can to silence anybody — the journalists, their families, their colleagues, the newsrooms that they work in,” Rezaian told VOA. “But it’s a good lesson that people are giving to the government that they are no longer willing to stay quiet, especially when it comes to journalists who are just getting arrested for doing their job and nothing beyond that.”

Like those at IranWire, Rezaian and others at CPJ have built a network of trusted sources that includes journalists, citizen journalists and others. They’ve found ways to connect via social media, apps and phone calls.

The information they gathered has been distressing.

Rezaian said the regime has created an “environment of fear” through raids on journalists’ homes after midnight, ransacking houses, confiscating personal items such as laptops and notebooks, and making arrests without showing any warrants.SEE ALSO:’They Just Disappear’: Iran’s Journalists Detained Over Protest Coverage

Those within prison have been kept in solitary confinement for long periods, some for over three months at a time, or in overcrowded cells with little access to medical care, showers or bathrooms — in one instance 100 women were forced to share three toilets. CPJ has also heard reports of those in prison under mental duress being given tranquilizers containing high doses of morphine.

Journalists sent to trial have not been able to choose their own lawyers or in some cases did not have any access to legal representation. And after closed-door trials lasting only five to seven minutes, several have been handed “extremely heavy sentences,” Rezaian said.

Yalda Moaiery, the first journalist to be arrested, was sentenced to six years in prison, followed by a two-year ban on leaving the country and on using social media and smartphones, and a three-year ban on working as a journalist, all for taking photos of the protests.

Iran’s Mission at the U.N. did not respond to VOA’s request for comment.

Rezaian said the ban on leaving the country is a “message that [Iran’s regime] doesn’t want journalists to get out and be more outspoken in the international community.”

But even from exile, journalists like Ghajar, Alinejad and Rezaian continue to ensure news gets out.

“I’m in contact with families, here in my room,” Ghajar told VOA. “Every day, every night I am listening to them. I try to figure out how I can be their voices.”