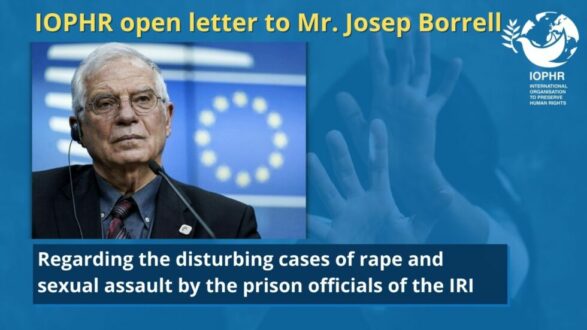 The open letter of (IOPHR) to Mr. Josep Borrell, regarding the disturbing cases of rape and sexual assault by the prison officials of the IRI

Shabtabnews – In an open letter to Mr. Josep Borrell , the International Organisation to Preserve Human Rights (IOPHR) , while expressing grave concerns about the disturbing cases of rape and sexual assault by the prison officials of the IRI against children arrested by the regime, requested that “the European Commission appoint a special and independent commission in order to investigate these reports. Also until the publication of the results of this commission, EU should immediately cease all political and diplomatic interaction and negotiations with the corrupt regime ruling Iran!”

The letter while highlighting the abhorrent cases of sexual assault against children arrested by the Iranian Regime, which have been confirmed by reliable Western newspapers, asked the EU to consider these cases as “clear examples of crimes against humanity!” The letter also stated that ” By now it should be clear to all that the Iranian regime not only does not respect any fundamental rights of human beings, but also does not respect its international obligations. Given all these evidence, a reasonable question that can be raised in this regard is whether the unwarranted and unjustified insistence of the European Union’s foreign policy apparatus on the continuation of political and diplomatic interaction with such a criminal regime, does not itself imply a legal responsibility for the members of the Union!”

The letter concluded by stating that “It should also be obvious that the European Commission’s response and stance on the issue of sexual assault on Iranian children by the agents of the Islamic Republic of Iran will be seen by the international community and all those globally interested in upholding human rights, as a real test of commitment of the European Commission towards upholding the values of human rights, especially the rights of children. “

For full text of the letter see below link: