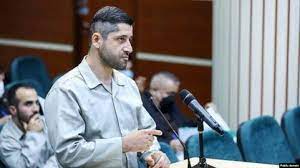 CHRI – The sentencing of theater actor Hossein Mohammadi to death in Iran after a show trial, and the arbitrary detentions of more than 100 film and theatre industry workers including superstar Taraneh Alidoosti, mark the latest chapter of the Islamic Republic’s deadly crackdown on dissent three months into the anti-state protests that have rocked the nation.

“The international community, including film industry members and institutions, should loudly condemn the Islamic Republic’s use of death sentences and arbitrary imprisonment as tools of political repression,” said Hadi Ghaemi, executive director of the Center for Human Rights in Iran (CHRI).

“Artists in Iran have long been forced to navigate an environment rife with state censorship and arbitrary rules imposed on their freedom of expression, and now they’re being sentenced to death and thrown in jail for speaking out against injustice and repression,” he added.

“Anyone with a public platform should use it to speak out against the Iranian government’s relentless use of extreme violence against people who are simply demanding basic rights,” said Ghaemi.

Hossein Mohammadi, a 26-year-old theatre actor known for his charity work, is among at least 11 men who have been sentenced to death in Iran without due process, according to research by CHRI. Another 25 are facing charges that could carry the death penalty.

Two young men, Mohsen Shekari and Majidreza Rahnavard, have already been executed in connection with the protests.

Mohammadi was sentenced to death along with four other defendants by a revolutionary court in Karaj on December 8, only a month after he was arrested, meaning his court-appointed lawyer had no time to prepare a proper defense, on the catch-all charge of “corruption on earth.” This charge is frequently used by Islamic Republic courts against individuals who engage in peaceful dissent.

He was charged in an alleged connection with the killing of Ruhollah Ajamian, a member of the Basij paramilitary force, during a gathering to mourn the 40th day after the death of 22-year-old Hadis Najafi, who was killed by state security forces in Karaj, Alborz province. Mohammadi denied any involvement in the killing during his sham trial, in which he was denied the right to a lawyer of his choosing and forced to use one approved by the judiciary.

He was also absent in a series of forced “confessions”  aired by Islamic Republic state television on November 6 that included Mohammadi’s co-defendants.

“Hossein is the type of person who would get depressed by the death of a bird,” one of his friends told CHRI on the condition of anonymity. “He was concerned about child laborers. He was and is all about love and humanity.”

“When we heard that he had been arrested, we thought he would soon be freed like hundreds of our other friends in the theater community,” added the source, referring to colleagues who had joined the anti-state protests. “But when we heard his name mentioned in the trial in Karaj, we were shocked.”

Mohammadi was himself shocked by the charge, according to the source.

“Two days after the gathering for Hadis Najafi’s 40th, we heard Hossein had been arrested at his home,” said the source. “He called his family and said his arrest was a misunderstanding and he would soon be freed but suddenly he was charged in connection with the Basiji’s death.”

“Neither I nor any of our mutual friends believe any of the charges against him,” added the source. “He could not have done this.”

Another of Mohammadi’s friends told CHRI, “We were a group of theater friends who engaged in charity work. When we saw Hossein’s photo among one of the prisoners sentenced to death, we were stunned. I remember he was so passionate about performing puppet shows for children suffering from cancer in the hospital to make them forget their pain for a while.”

Director Saeed Roostaee wrote on his Instagram, “You can see every expression on [Mohammadi’s] face other than violence. He’s a capable actor but he can’t play the role of a violent person, let alone carry out a violent act that would deserve the death penalty.”

There were 16 defendants in the brief show trial that included Mohammadi as a defendant, including five of whom were sentenced to death. All of the defendants were denied the right to be represented by an independent lawyer.

Her last two posts included one denouncing the execution of street protester Mohsen Shekari, and another one including a photo of herself without the state-mandated hijab along with a statement of support for the country’s “Woman, Life, Freedom” movement.

On December 18 and 19, a number of Alidoosti’s peers gathered in front of Evin Prison to demand information about her condition. The Cannes Film Festival has also called for her immediate release.

“How can it be that in this situation, when our best actors, our best directors, our best musicians and rappers are in your prisons, you ask us to put on concerts for you and organize your film festivals?” said film director Mani Haghighi in an Instagram message.

Haghighi was responding to recent comments by Minister of Culture Mohammad Mehdi Esmaeili, who had called for the art community to renew their activities and claimed that the Islamic Republic’s Fajr Film Festival would be held this year without disruptions.

“We are obliged to visit our friends in prison…In the four corners of this country, we are burying our loved ones. We do not have time to dance for you,” Haghighi added.

Since September 16, after major anti-state protests erupted across Iran following the announcement that Jina Mahsa Amini had died in state custody after being arrested by the so-called “morality police,” dozens of actors, actresses, directors, producers, and writers in the theater community have been detained.

Some have been freed on bail, awaiting trial on national security charges, including Soheila Golestani and Hamid Pourazari, who took part in a viral video against the mandatory hijab.

Meanwhile Mehdi (Keyvan) Hosseini, a theater director and actor, has been sentenced to two years in prison by Branch 29 of the Revolutionary Court in Tehran. He has been released on bail awaiting the outcome of his appeal.

In July, two months before the current protests erupted in Iran, internationally renowned director Jafar Panahi was rounded up along with more than a dozen prominent members of civil society who had recently spoken out against violent state repression.

“This is Iran, where every peaceful demonstration turns into violence by the Islamic Republic,” he had said in a May 2022 Instagram post with a compilation of videos showing protests in Iran.

Panahi is currently serving a six-year prison sentence that was issued against him in 2010 for expressing support for the country’s 2009 Green Movement. It had previously been suspended, meaning it could be re-imposed any time, and was ultimately reinstated after Panahi joined an online campaign by celebrities calling on Islamic Republic armed forces to “Lay Down Your Gun.”

Women are being arrested and jailed in Iran for refusing to wear forced hijabs, including prominent actress #TaranehAlidoosti.

The power of women’s voices terrify the Islamic Republic’s rulers.
Watch this video to understand.#مهسا_امینی#ترانه_علیدوستی pic.twitter.com/6pVknD3Dgl