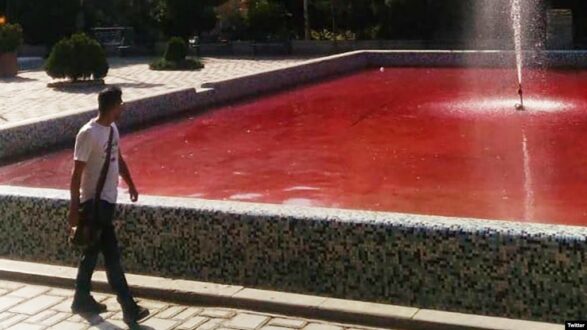 Al-Arabia – There will be “mass executions” of protesters in Iran if Tehran does not face “serious consequences” for its execution of a protester, a human rights group warned on Thursday, after the Islamic Republic carried out its first death penalty over demonstrations sparked by Mahsa Amini’s death.

Mohsen Shekari, who had been convicted of wounding a member of the security forces and closing off a street in Tehran, was executed early Thursday, state media reported.

He was only 23 years old. This morning, just before sunrise, the Islamist regime in Iran executed #MohsenShekari, a protester they had arrested in #Tehran

According to state media, Shekari was arrested on September 25, nine days after Amini’s death which has led to nationwide protests against the Islamic Republic.

Amini, a 22-year-old Iranian Kurdish woman, died shortly after her arrest by the morality police for allegedly not complying with the regime’s strict hijab rules.

Since her death, demonstrators have been calling for the downfall of the regime in a movement that has become one of the boldest challenges to the Islamic Republic since its establishment in 1979.

“Mohsen Shekari’s execution took place after a hasty, unfair trial and without a lawyer. The international community must immediately and strongly react to this execution,” IHR Director Mahmood Amiry-Moghaddam said in a statement published on the group’s website.MIDDLE EASTIran protestsSister of Iran’s supreme leader denounces him, calls on military to support protests

“This crime should have such consequences for the (Iranain) government that it prevents further executions,” he added.

Amiry-Moghaddam warned: “If the execution of Mohsen Shekari does not have serious consequences for the government, we will face mass executions of protesters.”

At least 11 others who were arrested during protests have been sentenced to death and are “in serious and imminent danger of being executed,” IHR said.

At least 458 people, including 63 children and 29 women, have been killed by security forces in the protests, according to IHR.