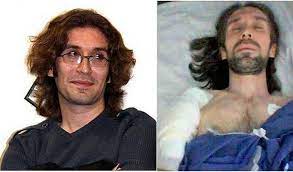 RFL/RE – Hossein Sadeghi, the father of imprisoned Iranian activist Arash Sadeghi, has again warned about his son’s deteriorating state of health and called on countries around the world to press Tehran to release him.

Arash Sadeghi, who has been imprisoned several times, is suffering from bone cancer and his father says the prison authorities have prevented him from accessing medicine and treatment.

Sadeghi was arrested on October 12 during protests that are rocking the country over the death of 22-year-old Mahsa Amini after she was taken into custody by morality police for allegedly improperly wearing her head scarf, or hijab.

Sadeghi’s father has expressed concern several times about his son’s condition. In response, a campaign has been launched on social media in support of the activist. His name has been used more than 1.5 million times on Twitter since the beginning of November.

The activist has already undergone surgery due to chondrosarcoma cancer, and according to human rights groups, and the doctors who treated him say he should have been sent to the hospital every four months after surgery to undergo treatment courses.

Sadeghi was a student at Allameh Tabatabaei University in Tehran where he was expelled by the authorities due to his political activities.

In 2013 he was sentenced to 19 years in prison on charges of propaganda against the government, defamation of the supreme leader, and threatening national security.

He has gone on hunger strike several times, including in 2016 to protest the arrest of his wife, who was detained on a charge of writing fiction that has not yet been published.

Sadeghi, who was diagnosed with cancer during his previous imprisonment, was released from prison a year and a half ago after enduring more than five years behind bars.

Many high-profile activists, rights advocates, and intellectuals have also been arrested in recent days because of the protests, including Fatemeh Sepehri and Majid Tavakoli.

At least 116 journalists and columnists are among those arrested, according to RFE/RL’s Radio Farda.

They include Yalda Moayeri, Arash Ganji, and Niloufar Hamedi, who reported from the Tehran hospital where Amini died on September 16.