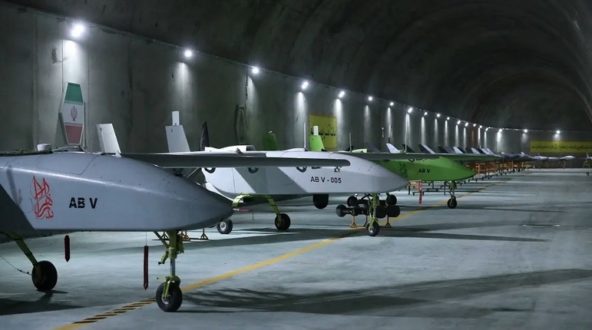 Al-Arabia – On October 17, Kyiv residents woke up to loud explosions. Russia had just launched a wave of drone attacks on civilian targets across Ukraine, which it carried out with Iranian-made Shahed-136 “suicide drones.” The Ukrainian targets had little military value but spread fear among the population and signaled the potential scale of wanton destruction Russia can still inflict on Ukraine despite Moscow’s battlefield losses.

By airlifting deadly weapons to Russia, Iran has become a willing accomplice in the rape of Ukraine. Yet the supply chain enabling these attacks goes further than flights transferring weapons and personnel. It includes logistics on the ground, production, acquisition of foreign technology, and—potentially—assistance by third parties such as Syria and Venezuela. Sanctioning Iran’s supply chain at each step of the way should be a priority for the US and its allies.

Iran can send weapons to Russia with relative ease—after a decade of equipping Syrian tyrant Bashar al-Assad with the means to butcher his own people, Tehran has perfected its methods. The supply chain that leads from Iran’s drone factories to Russia’s killing fields in Ukraine is a straightforward cargo airlift that appears to employ the same airlines and aircraft that once flew to Damascus. Iran is also reportedly deploying personnel to Ukrainian occupied territories to help Russian forces operate the drones. Ukrainian official sources recently claimed to have killed 10 Iranian military advisors in Crimea.

Since the beginning of Russia’s invasion of Ukraine, Iran has run frequent cargo flights to Moscow via Iran Air, Fars Air Qeshm, Puya Air, and Saha Airlines, all linked to Iran’s Revolutionary Guard Corps, or IRGC. According to aviation watcher, Gerjon, as of October 10, Iran has flown at least 62 cargo flights to Russian airports since the beginning of the invasion.

The active and frequent travel to Moscow by Iranian cargo has not escaped notice.

In September of this year, the Biden administration added four Iranian cargo planes to its US Department of Commerce blacklist of aircraft involved in export control violations. Among those aircraft is a Boeing 747 operated by Qeshm Fars Air, which the US Department of the Treasury sanctioned in 2019 for its role supplying Syria-based Iranian forces and their proxies with military equipment. According to Treasury, Qeshm Fars operated regular cargo flights to Damascus “delivering cargo, including weapons shipments” on behalf of Iran’s Islamic Revolutionary Guard Corps’ special operations branch, the Quds Force.

Qeshm Fars’ planes have been flying to Russia since the February invasion of Ukraine. Commercially available flight tracking data from the website FlightRadar24 show that the only operational aircraft currently in Qeshm Fars’ fleet, a Boeing 747 with registration number EP-FAA, flew more than 20 times between Tehran and Moscow since Russia’s invasion began on February 22. That same plane only flew twice to Moscow in the six months preceding the invasion). EP-FAA discontinued its flights in early September, likely due to maintenance issues, but flights continued with Saha Airlines’ only aircraft, another Boeing cargo 747, which since August has visited Moscow six times. Alongside these two aircraft, Iranian cargo forays to Moscow since February 24 include 28 flights operated by Puya Air and 12 by Iran Air. These flights may be carrying different types of military supplies, but the Department of Commerce designations in September make it clear their cargo includes drones.

Iran began to supply Russia with its drones since at least this past summer, according to US officials. Evidence obtained from debris of downed drones shows that, in addition to the Shahed-136, Russia is deploying the Mohajer-6, a drone Iran is said to have supplied to Venezuela as well. Venezuela’s state-owned and US-sanctioned airline, Conviasa, recently acquired long-haul aircraft from US sanctioned Iranian carrier, Mahan Air, through a Dubai intermediary. Mahan sold Venezuela four aircraft in the summer of 2021, including a Boeing 747 cargo, currently operated by Conviasa’s subsidiary Emtrasur.

The Emtrasur plane was seized in Argentina in June, where it is currently grounded, subject to a US seizure warrant. Its flight logs, seized during searches conducted by local authorities, show that Emtrasur flew to Moscow at least once during its short-lived operation between February and June 2022. Conviasa also bought passenger aircraft from Mahan—three Airbus 340s. Two of these planes have also routinely flown to Tehran and then Moscow before returning to Caracas. Passenger manifestos for some Conviasa flights operated by this aircraft, which the author obtained from a Venezuelan opposition source, indicate the planes are flying with hardly any passengers, a potential sign that they could be transporting cargo.

Iranian ability to reverse engineer Western technology, including drones, is well-documented. In at least one publicized US court case, Hezbollah proxies procured technology for Hezbollah’s UAV program from US companies. Thanks to these technological acquisitions, Iran has been able to enhance its arms manufacturing industry, which Iran is establishing beyond its borders to support its imperial ambitions. Just last week, media reports indicated that Israel bombed a Syria-based drone factory manned by IRGC and a Hezbollah unit with suspected links to the IRGC’s Quds Force. Last summer, Iran inaugurated a UAV manufacturing facility in Tajikistan where Ababil-2 drones are said to be produced. During a large drone exercise, also last summer, which Russian, Belarusian, and Armenian forces attended alongside their Iranian counterparts, Iranian state media disclosed an underground drone manufacturing facility inside Iran.

Iran’s drone threat should be no surprise to Middle Eastern audiences. Not only has Iran transferred its drone technology to its regional proxies, Hezbollah in Lebanon, and the Houthis in Yemen, which were used to attack civilian infrastructure targets inside Gulf countries. It has also repeatedly tested Israel’s mettle by trying to penetrate its airspace with drones from the Syrian side of the Golan Heights. The use of drones for kamikaze attacks, as it happened in Saudi Arabia and the United Arab Emirates, is eerily reminiscent of their recent use in Ukraine. It reminds us that that spreading terror is integral to Iran’s military doctrine, in brazen disregard of the laws of war.

There is much that countries in the region can do to push back. First, and foremost, they should recognize that Ukraine is facing the same threat confronting Israel and Gulf countries. Hitting back at Iran and Russia is therefore imperative. Aircraft participating in the Russia airlift should be banned by regional powers—the Iran Air 747 that routinely flies to Moscow has been also flying into Doha and Dubai lately, for example.

The US too should expand its blacklist of aircraft and move to expand sanctions against those involved in the airlift, extending its designations to Iranian pilots. Sanctions should mirror US efforts to target manufacturers and logistics companies too. These measures cannot prevent Iranian and Russian aircraft from flying the Moscow-Tehran route. But they can exact a heavy price on Iranian and Russian civil aviation operations elsewhere.

Beyond sanctions, Israel and the Gulf countries should step up their diplomatic, humanitarian, and military support for Ukraine. What happens in Ukraine, as both Saudis and Emiratis have learned from recent drone attacks on their own civilian infrastructure, has happened and can happen again in the Middle East.
The use of drones against civilian targets is a war crime. If met with indifference and rewarded with impunity, it will become the standard by which countries like Iran and Russia can bleed their adversaries financially while terrorizing their populations. For the Middle East, whose civilian infrastructure has already been targeted by Iran, this should be a wake-up call to push back before it is too late.