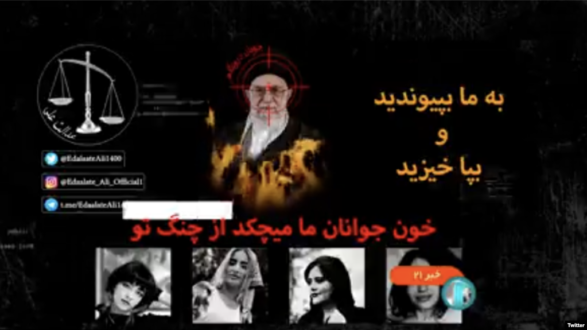 RFL/RE – Activists in Iran have disrupted a live state television broadcast by airing images and messages in support of continuing protests against the government and the country’s strict hijab law requiring women to wear head scarves.

Islamic Republic TV footage of Supreme Leader Ayatollah Ali Khamenei meeting state officials was interrupted briefly on October 8 and replaced with images of slain protesters and 22-year-old Mahsa Amini, whose death in police custody last month after being arrested for not wearing a head scarf sparked protests across the country.

An image showing Khamenei in crosshairs and in flames was also aired during the interruption, for which the hacktivist group Edalat-e Ali took credit. The images were accompanied by the words “join us and rise up.”

The semiofficial Tasnim news agency confirmed that the state TV news broadcast “was hacked for a few moments by anti-revolutionary agents.”

Hassanein Haddad, a spokesman for Iran State Radio and Television, said that the incident was not a hack, but an act of “vandalism and infiltration” from within the channel itself.

The protests, which erupted around the country after Amini’s death on September 16, continued in Tehran and other cities on the night of the broadcast.

Labor strikes were also reported in Kurdish-majority regions on October 8, including in the city of Sanandaj, where two protesters were reportedly shot dead. Security forces were also accused of opening fire in Saqez.

The Oslo-based group Iran Human Rights says that more than 90 protesters have been killed by the security forces as the protests enter their fourth week, while other groups have placed death figures at 160 or more, with hundreds more injured and thousands arrested.