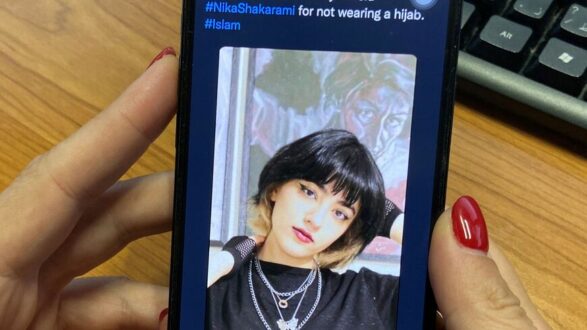 Iranwire – The mother of a teenager, Nika Shakarami, who died during recent protests in Iran has denounced a state television report in which her family was forced to disavow claims that Nika was killed by security forces. Nasrin Shakarami, Nika’s mother, added that she had been threatened with also being made to appear in a similar forced broadcast.

Nika, 16, disappeared on September 20 during a street protest in Tehran. When she did not return home by midnight, her family spent days searching in prisons, detention centres, police offices and hospitals.

“On September 19, at 5pm, my daughter went out to participate in a protest against compulsory hijab,” Nasrin said. “I was on the phone with her at around 1130pm, while talking with her I could hear her friends warning ‘Officers! The officers!’ and it seemed they were running and the police were after them. Then I lost her signal and her mobile turned off,” Nasrin added, in an interview broadcast by Radio Farda.

Other protesters told the family that Nika had been moved to Evin, a notorious prison in the capital, after the intelligence officers of the Islamic Revolutionary Guard Corps (IRGC) interrogated her.

The family finally found her body after ten days, almost by chance, in a detention centre morgue.

Nasrin Shakarami said: “We had no news for nine days. During these days a man kept saying that he had checked Nika’s ID number and that he was sure that the IRGC had arrested her. And [that] she is fine. On day nine, my brother and I went to the police station again to seek new information about her. They showed us pictures of her dead body and said they are the pictures of her body on the morning of September 20 and they have given her body to the Kahrizak morgue.”

On September 29, when the family went to a police station to fill out paperwork, the police told them they had found a body which bore a resemblance to Nika and asked them to look at it in the Kahrizak detention centre morgue. The family then confirmed the body was Nika’s.

Atash Shakarami, her aunt, said their request to see the whole body was declined. “When we went to identify her, they didn’t allow us to see her body, only her face for a few seconds,” she told the BBC. She was later arrested after posting a picture of Nika on social media.

According to Atash, security officials noted the cause of death as “a fall from height” in her death certificate. A photo attached to it shows Nika’s body on a pavement somewhere in the capital.

They received her body the next day and started transferring it to Khorramabad for burial. But security agents kept threatening them along the way.

Nika became an icon for the anti-government movement. Protesters have shared video of her laughing and singing a Persian song just days before her disappearance.

The Islamic Republic responded to growing public outrage over the death by opening an investigation. Officials told state media there were no bullet wounds in the teenager’s body and that her death was not linked to protests, and she had fallen from a roof.

Nika’s uncle and mother said the pictures did not look like someone who had fallen from a height. “It seemed that the water bottle and mobile phone were arranged next to her for the purposes of the picture,” they said.

They noticed her skull and nose were broken when they received the body for burial. Nika’s body had been stitched from her chest to her stomach. The stitches were the results of the autopsy, security officers told them.

“The hospital report says she was killed because of multiple strikes of a hard object to her head. and nothing else,” said Nasrin Shakarami. “I have seen my daughter’s body. Her body was fine but her face, teeth and back of her skull were smashed. I reject whatever they reported about her death. They also threatened me to come and say whatever they have made up about her,” she added.

Nika’s body was transferred to her father’s hometown of Khorramabad in the west of the country over the weekend. Her aunt announced through her social media accounts that the burial would be on Saturday – which would have been Nika’s 17th birthday – and invited everyone to her “last birthday party”.

Intelligence officials then summoned the family and warned them to bury Nika in private. Her family refused.

Riot police stormed the burial procession on Monday, arrested Atash and moved Nika’s body to an undisclosed location for burial. Police said they would tell the family later the location of the grave.

“They asked us to bury her body somewhere else,” Nasrin, Nika’s mother, said on Radio Farda. “On the morning of her burial day, they [security forces] stole her dead body under a tightened security situation and buried her in a very remote village, without telling anyone. They have arrested my brother and sister. Put them under lots of pressure and forced them to tell some ridiculous lies on television.”

The BBC also reported that the family was warned that, if they continued to investigate the cause of Nika’s death, her aunt Atash would end up dead in similar circumstances.

Apparently seeking to quell public anger over Nika’s death, Iranian state television has broadcast a report about her that raises more questions than it manages to answer.

In the report, the Tehran prosecutor says local people called the police to report a dead body outside the building just down the road from Nika’s house. It does not explain how the family did not hear the news and looked for Nika for 10 days.

The report suggests that Nika’s body was found in the back yard of a five-storey building.  However, the family had initially said that a security official had shown them a picture of where they found her body, which looked like a sidewalk rather than the back yard of a building.

In another apparent contradiction, the channel broadcast CCTV footage which they claim showed Nika entering a residential building. A person whose face is covered with a hat walks, while talking on the phone, and with no sign that they are running away from security forces. The images are clear, but Nika’s face is not visible. The person appears to have dark hair, whereas Nika’s hair was light-colored at the time of her death.

The video shows air conditioning units on some floors which indicate the building is occupied. However, state news agencies had previously reported that the building was under construction, with no residents apart from eight workers. All of them have reportedly been arrested.

The police provided no account of the time between her entering the building and falling to her death.

In another scene, the building manager points at where Nika’s bag allegedly fell, along with footage that he apparently recorded on his cell phone. However, the footage shows only Nika’s body and a view of a backpack and her mobile phone, which appear to have been arranged deliberately.

Her family has previously said all the apps on her phone – which might have given some insight into her movements on the night she disappeared – had been deleted.

Notwithstanding their previous public comments, Nika’s aunt and uncle, Atash and Mohsen Shakarami, were pressured to appear in the TV report and pour cold water on the allegations that Nika had been killed by security forces.

The report on Nika’s death begins with an admission from her aunt that she had herself participated in an anti-government protest in which she had burned her headscarf.

And her uncle told the TV network that the family condemmed the public demonstrations.

“We pursue our demands through public authorities and refrain from any violent actions that lead to damage to public property,” he is seen telling the interviewer who nods his head approvingly. “We not only do not support it but also condemn it.”

Iranian women have been required to wear the hijab in public since the 1979 Islamic Revolution, but president Ebrahim Raisi signed an order on 15 August to enforce the country’s dress code law with a new list of restrictions.

The latest wave of public anger, which entered day 19 on Thursday, flared after Mahsa Amini, a 22-year-old woman from Saqqez, died in police custody on September 16, three days after her arrest for allegedly breaching Iran’s strict rules for women wearing hijab.

Protesters have tapped a deep well of grievances against the Islamic Republic, including with the country’s social restrictions, political repression of opposition figures and groups, and the state of Iran’s weak economy.