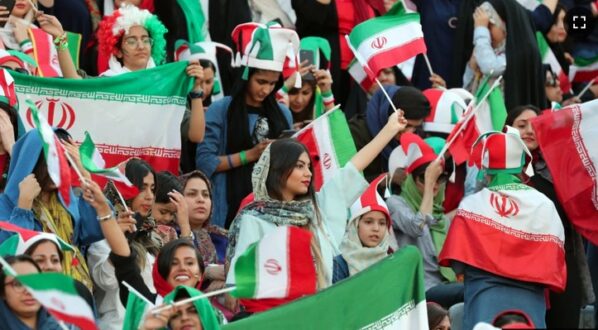 RFL/RE – Rights group Open Stadiums have called on world football’s governing body to kick Iran out of the World Cup finals in Qatar in November because of the Islamic Republic’s discrimination against women.

In an open letter sent to FIFA President Gianni Infantino on September 29, the group said Iranian authorities continued to refuse to allow female fans access to games inside the country.

“The Iranian FA is not only an accomplice of the crimes of the regime. It is a direct threat to the security of female fans in Iran and wherever our national team plays in the world. Football should be a safe space for us all,” the letter said.

“Therefore, we ask FIFA, based on Articles 3 and 4 of its statutes, to immediately expel Iran from the World Cup 2022 in Qatar.”

The articles mentioned refer to issues of human rights and nondiscrimination based on gender, race, religion and other matters, with breaches punishable by suspension or expulsion from the global body.

Open Stadiums has campaigned over the last decade for women to be allowed to attend football matches in Iran, but with only limited success.

The call comes as protests continued in several cities across Iran against the death of young woman in police custody, state and social media reported, as a human rights group said at least 83 people had been killed in nearly two weeks of demonstrations.

Iran is due to attend its sixth World Cup finals in Qatar and has been drawn to face England, Wales, and the United States in the group stage.