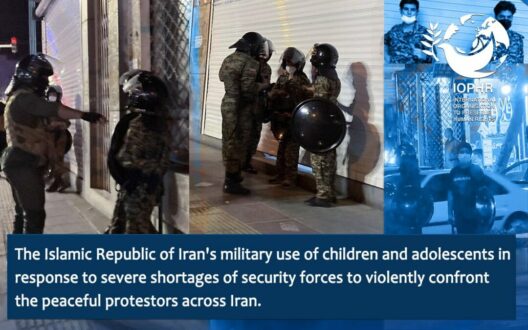 Shabtabnews – In a statement IOPHR condemned the abhorrent use of children as a means of violent suppression of the peaceful demonstrations of the people of Iran . The statement stated: “Recently, alarming news has been published about the use of children as a tool of repression and violence by the ruling regime against the peaceful demonstrations of the Iranian people.

“The statement also stated that : “Violation of children’s right to life has continued in the Islamic Republic of Iran in the following years, as in the meeting of the United Nations Human Rights Council on March 19, 2019, when informed about the fact that the laws of the Islamic Republic of Iran permits execution of girls 9 years of age and older, experts and reporters were “shocked and shaken.

“However, Iranian children are also victims of human rights violations by the ruling system in many other aspects such as: child marriage, sexual slavery, forced labour, deprivation of education, religious and ethnic discrimination, acts of violence under the name of religious education, torture, punishment, long-term imprisonment (especially during adolescence), with the sole aim of the juveniles reaching the age adulthood, so they can be executed. Moreover, military extortion are other common cases of violation of the rights of children and adolescents in Iran.

“Recently, based on similar news from numerous and very reliable sources, the repression machine of the Islamic Republic of Iran is using children to compensate for the loss of security and law enforcement forces in their violent confrontation with the peaceful protesters, who are demonstrating for the abolishment of the mandatory hijab law.  According to these reports, due to the non-cooperation of various sections of the society with the government in dealing with the demonstrators, the intelligence agencies have faced a severe shortage of forces and have resorted to mobilizing and equipping children to compensate for this shortage. It should be noted that not long ago, a song called “Salam Commander” was made and published in which children under the age of eleven expressed their loyalty to the leader of the system.”

The statement concluded by saying : “The IOPHR warns all the governments of the world, especially the democratic governments, regarding the very dangerous and unpredictable consequences of appeasement and silence against the military use of children by the Islamic Republic, and reminds that children are vulnerable and their protection is the humanitarian and international duty of all the nations of the world against the evildoers of the ruling system in Iran. “

For the full text of statement see below link: