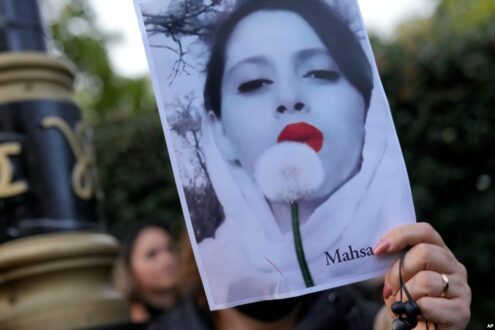 RFL/RE – The anti-government protests that have rocked Iran for the past 10 days are leaderless.

Though the women who have removed their obligatory head scarves and burned them are at the forefront of the demonstrations triggered by the suspicious death of 22-year-old Mahsa Amini after her arrest by Tehran’s morality police, hard-line media and politicians have blamed soccer superstar Ali Karimi for fomenting the protests, calling him one of the leaders of what they describe as “riots” and “sedition.”

The Dubai-based Karimi, the former captain of Iran’s national soccer team, has come under fire for his posts on social media, including on Instagram, where he has nearly 12 million followers.

Karimi, widely regarded as one of the greatest Iranian players of all time, has condemned Amini’s death in lending his support to the protesters, particularly women, and urged the army not to allow “innocent blood to be shed.”

“Don’t be afraid of strong women. Maybe the day will come when they are your only army,” Karimi said on Twitter to his more than 450,000 followers.

He’s also called for unity while blasting the exiled opposition Mujahedin Khalq Organization MKO), unpopular with many Iranians, for attempting to exploit the protests for political reasons.

The 43-year-old Karimi has also posted tips about safe virtual private networks (VPN) for Iranians to use to bypass state Internet restrictions, which have intensified amid the protests.

Authorities who have been cracking down on the protests, using force, warnings, and Internet restrictions, appear to fear his massive popularity and influence among Iranians, particularly the youth.

Protesters have in recent days taken to the streets of more than 80 cities while condemning state violence against women and calling for women’s rights, freedom, and justice. Many have called for an end to the Islamic republic while chanting “death to the dictator.”SEE ALSO:Iranian Regime Facing Major Challenge From Intense ‘Hijab’ Protests After Woman’s Death In Custody

The protests, which started in Amini’s home province of Kurdistan, have spread to dozens of cities across the country. At least 41 people have reportedly been killed while scores have been arrested, including journalists, activists, and protesters. Activists say the death toll is much higher.

The police say Amini had sudden heart failure on September 16 after being taken to a police station to be “educated.” They denied claims that she died from blows to her head. The protests have intensified even though the government has ordered an investigation to be carried out.

In a video from a protest in Tehran posted on Twitter by activist 1500Tasvir, protesters are heard chanting Karimi’s name.

“People love him, they see him as one of them and — unlike some of the [Iranian] figures sitting in the West — they respect him, hence the attacks against him,” a Tehran-based journalist, who asked for anonymity for security reasons, told RFE/RL.

“His justice-seeking personality along with his genius in soccer has made him a figure that has always made Iranians proud,” Heirani said.

‘You Sold Your Country…’

He noted that Karimi had expressed support for the Green opposition movement that was brutally suppressed in 2009 after taking to the streets to protest the reelection of hard-line President Mahmud Ahmadinejad amid allegations of voting fraud.

“Later, a photo was published where Karimi was seen sitting without paying any attention to Ahmadinejad who had come to see the team practice.”

The Fars news agency, affiliated with the powerful Islamic Revolutionary Guards Corps (IRGC), has called for Karimi to be “dealt with” while others, including hard-line lawmaker Ali Rasaei, said his properties in Iran should be confiscated.

Speaking on September 26, Iranian Judiciary chief Gholam-Hossein Mohseni-Ejei warned celebrities who have come out in support of the protesters without naming names.

“Those who became famous with the support of this system…all of them should know that they have to pay for the damages caused to this country,” he said, adding: “they will be identified and they will be punished for their actions.”

The hard-line Rooz Plus claimed that Interpol has issued a red alert for the arrest of Karimi. But Etemadonline reported that judiciary officials have not made such a request.

During this week’s state-organized rallies aimed at countering the protests due to Amini’s death, some participants reportedly had signs against Karimi, including one that accused him of being a traitor.

“You sold your country for what? A visa for Canada?” a handwritten sign held by a young girl and published by domestic media said.SEE ALSO:Iran Stages Rallies To Counter Week Of Anti-Establishment Protests Over Woman’s Death In Custody

Karimi reacted by reposting the image and telling the young girl that he loves her like his own daughter and wished her and “all the girls of my land the best.”

Heirani said Karimi’s stances have in recent years angered Iranian authorities, including Supreme Leader Ayatollah Ali Khamenei, who has the final word in the Islamic republic.

“Khamenei in a speech has blasted Karimi and Voria Ghafuri (a popular soccer player critical of the Iranian establishment) and accused them of [betrayal] without naming them,” Heirani said, adding that the state criticism has increased Karimi’s popularity.

He also noted that Karimi’s presence in Dubai has given him more freedom to express himself.

“Perhaps many of the youth who considered him a sports and moral model now see him as a symbol of not remaining silent in the face of the tyranny ruling Iran.”

Karimi is among a number of well-known public figures who have in recent days shown solidarity for the protesters while condemning state violence.