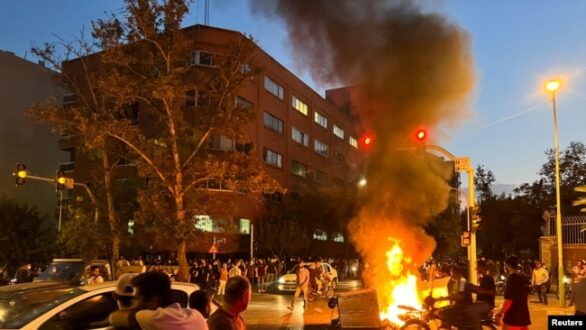 CHRI – Over the past few years, Iranians have regularly told us that the generation born in the 2000s is different in its outlook, methods of protest, and demands. This characterization is confirmed in our many conversations with Iranians.

A 68-year-old retired high school teacher residing in the northeastern city of Mashad, told us: “These protests are very different than anything I have witnessed before. I didn’t see such scenes even during the 1979 revolution. What I see from this generation born after the 2000s is unbelievable. Over the past 40 years I have taught several generations of students all over my city, but this is a different generation.”

A 36-year-old female principal of a girls’ high school in Mashad told us: “Our students have a distinct approach that in my opinion is very transparent and direct. This is a big difference with my generation who were born in the 1980s. I even see this in their interactions with their parents. As a result, they become very united during protests and very clearly and directly express their demands and anger.”

The traditional start of the new school year in Iran was Saturday, September 24. The government is fearful of students coming together and swelling the ranks of protesters. In several cities, such as Mashad, the start of the secondary schools has been postponed for a week. Higher education institutions have been ordered to hold virtual online classes and not to have the students in person.

A principal of a girls’ high school in Mashad told us: “The girls in our high school not only have already been participating in protests, they are full of ideas for continuing the protests once they return to school. For example, they are planning on filling walls with demands, not wearing their hijab, and using the morning line-up in the yard for chanting. Our students have been in touch with me and several teachers through a WhatsApp group for the school students. I know that so far, the Intelligence Ministry has contacted the families of three students warning them not to allow their kids to participate in the protests. This is even before the school year begins. I mean they are threatening the kids even before they show up in school.

A retired high school teacher in Mashad says, “My 19-year-old grandchild is just about to start the first year of college. He leaves every night to join the street protest and I cannot bring myself to tell him not to go. If I do so, I have contradicted everything he has heard from me and his parents regarding the injustices and oppression of this regime.”

“This is not the time for signing the nuclear deal”

In many conversations, Iranian express the fear that the Iranian government will now drop its demands that are holding up a return to the nuclear deal, in exchange for world powers to allow it a free hand in violently crushing the protests.

A 47-year-old editor and translator in Tehran says: “What is really worrying us is the situation surrounding the nuclear deal. If the Islamic Republic walks back on its positions so the deal can be signed, then it will follow with a bloody crackdown.”

A leading civil society leader who is in hiding in Tehran (the government has arrested dozens of prominent Iranians in the past few days to prevent them from playing a public role during protests) told us: “This is not the time for signing the nuclear deal. We are extremely concerned that world powers will reach an understanding with the Iranian government where [Tehran] will walk back its demands so that they can have a nuclear deal, with the implicit and behind-the-scene agreement that the world will not take any meaningful actions in the face of a domestic bloodbath.”

“There is no turning back!”

The editor and translator in Tehran believes the country has reached a turning point. “I feel like we have passed a point on no return. There is no turning back! These protests may be put down, but there won’t be any reconciliation. Life for both sides of the aisle [the people vs. the State] is dramatically changed.”

“Confrontations with the security forces were everywhere”

“Ghoochan is a very small town and everyone knows each other. For example, a family from across the street have two sons who are members of the “Special Guard” [a division of security forces specially trained for putting down street protests]. Since the protests erupted in Ghoochan, their house has been totally dark and quiet and there are absolutely no visitors coming or going. They are keeping a low profile. They are afraid that people will target their house and approach it during protests or even throw rocks at their house.”