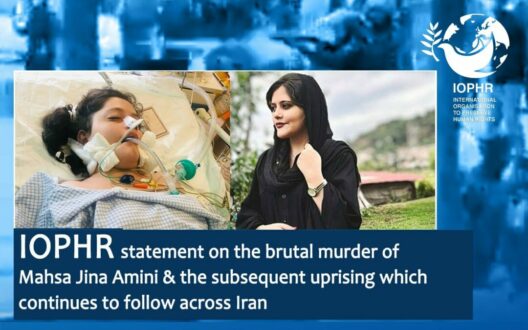 Shabtabnews – In a statement IOPHR while condemning the murder of Mahsa Jina Amini also stated that : ” This is yet another example of the unforgivable discriminatory approach of the Iranian ruling system towards its citizens. It is also a clear and undeniable example of the regime’s policy of indoctrination and discrimination against ethnic and gender related issues.”

IOPHR also stated that : “Ebrahim Raisi’s only response to the mass protests in Iran and murder of Miss Amini, was to shamelessly refer to the murder of Miss Amini as a case under review. All the while not even a single case of this kind has ever been investigated in the history of judiciary of the Islamic Republic of Iran.  For example, the cases of Mrs. Zahra Kazemi, an Iranian-Canadian journalist, who was killed by a blow to the head and a fractured skull. Zahra Kazemi, Hoda Saber Siamakpour, and Sattar Beheshti, who were all killed by the Iranian security forces, are just some of many other thousands of cases that have never been solved and their perpetrators have never been identified and brought to justice.”

IOPHR also drew the attention of the ” world to the important point that the peaceful and continuous demonstrations of the Iranian people, show the political illegitimacy of the ruling system of Iran, and clearly show the Iranian regime’s lack of popular base. Consequently, Ebrahim Raisi, who is accused of crimes against humanity based on numerous evidence, should not be considered as a representative of the Iranian people, and his presence as the President of Iran both in the United Nations and in the United States should be viewed as illegal and illegitimate.

Based on this, the IOPHR demands the immediate cancellation of Ebrahim Raisi’s political immunity, and the issuance of an arrest warrant against him by the US government on charges of crimes against humanity.”