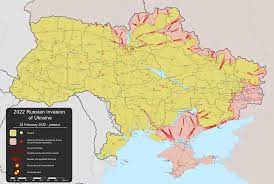 Al-Arabia – The acting United Nations High Commissioner for Human Rights said on Monday that Russia was intimidating opponents of the war in Ukraine.

“In the Russian Federation, the intimidation, restrictive measures, and sanctions against people voicing opposition to the war in Ukraine undermine the exercise of constitutionally guaranteed fundamental freedoms, including the rights to free assembly, expression, and association,” Nada al-Nashif said in a speech at the opening of the Human Rights Council in Geneva.

She also said Moscow was violating the right to access information by pressuring journalists, blocking the internet and through other forms of censorship.

Russia’s diplomatic mission in Geneva did not immediatelyrespond to a request for comment. Moscow has created stronger laws this year to punish those deemed to discredit the armed forces, spread fake information or call for unsanctioned public action.

Non-governmental organizations are calling for states to adopt a resolution at the council’s month-long meeting to create an independent expert to investigate alleged human rights violations in Russia.

The United Nations General Assembly suspended Russia as a member of the 47-member Human Rights Council in April over its invasion of Ukraine on February 24.

Russia denies targeting civilians in Ukraine and says it is carrying out a “special military operation” that aims to destroy Ukraine’s military infrastructure. Ukraine and allies say Moscow invaded without provocation.