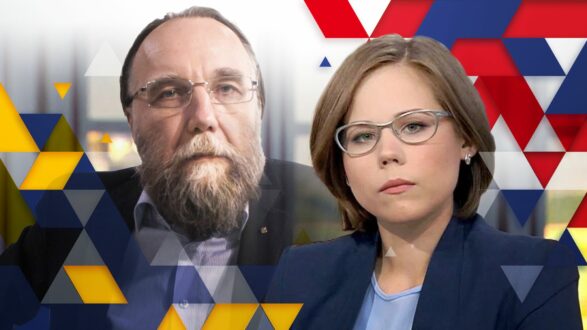 When fascists are calling their enemies fascists

Darya Dugina, daughter of famous self-proclaimed political philosopher Aleksandr Dugin, was killed in a car explosion earlier this month. The car she was driving belonged to her father which has lead to speculations that her father was the intended target. Since her death there have been many theories on the motives behind her murder.

Russia’s federal security service (FSB) was quick to blame the Ukrainian government for the murder. Ukraine has strongly denied any involvement in her death. Nevertheless, the killing of Dugina, who like her father, was a strong supporter of Putin and his decision to invade Ukraine, is believed to be a turning point in the war.
Dugina was a Russian political commentator, the chief editor of a propaganda and disinformation website, a strong supporter not only of Putin but evidently her father as well. She was, like her father, sanctioned by the US and the UK, a matter she expressed with a sense of pride in interviews. Dugina has been quoted talking about an Eurasian Empire in interviews which is a phrase coined by her father and she openly argued that the war crimes against civilians in Ukraine was staged and orchestrated to discredit Russia.

Her father, Aleksandr Dugin, is often described as an ultra-nationalist ideologue with close ties to president Putin. Dugin is referred to as “Putin’s brain” or “Putin’s Rasputin” reflecting his strong influence on the Russian president and he has been a leading advocate for the invasion of Ukraine for decades in his attempt at promoting a new Russia or rather a Russia at the helm of an Eurasian Empire. Dugin’s expansionist ideas are not restricted to Russia’s close neighboring countries but his propaganda reaches far beyond Europe and is joined by others who share his anti-Western and fascist views (read more here: https://english.shabtabnews.com/2022/05/24/the-rise-and-fall-of-a-powerful-media-mogul-running-irans-propaganda-machinery/).

Dugin deemed it appropriate to express his nationalist views at his daughter’s funeral saying that his daughter died for Russia and its people. He has also recently called out for revenge against Ukraine since his daughter has sacrificed her life for victory.
Although there are numerous speculations circulating on who’s responsible for her death FSB had no problem solving her case in less than two days with detailed statements and even video/photo materials describing the course of events. This rapid solving of a mysterious murder case by Russian authorities has raised more questions than answers since countless other political assassinations have been left unresolved for years, not to mention all the mysterious falls from balconies and disappearances that have occurred throughout the years. As a result, many, including exiled Russians are now questioning FSB’s statements regarding the murder and it is still unclear who was behind Dugina’s death.
Nonetheless, the killing of Dugina is now dominating much of Russian state TV’s broadcasting and has become a new focus of their propaganda intensifying the public’s interest in the war. Much in line with Dugin’s interests. US state department has warned that Russia will escalate their attacks on Ukrainian civilian infrastructure, also in line with Dugin’s agenda.
There is more than one mystery surrounding the death of Dugina, certainly it is still unclear who was behind the attack but it is also unclear why some journalists and analysts are questioning Dugin’s influence on Putin, that is a mystery indeed.