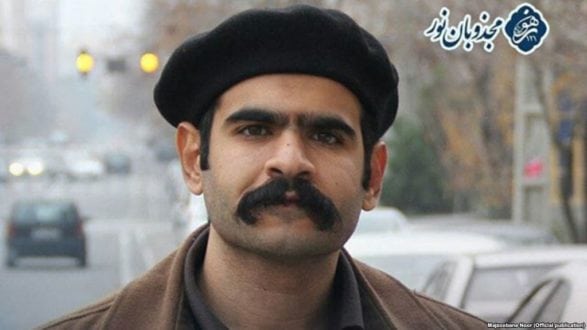 Iranwire – Last Thursday the imprisoned Gonabadi dervish and journalist Kasra Nouri was forcibly transferred from Adelabad Prison to an unknown location. According to his brother Pouria, his family have since had no news of his condition or whereabouts.

On World Press Freedom day in May 2021, Nouri was named one of the “10 Most Urgent” cases of persecuted human rights journalists around the world by the One Free Press Coalition (OFPC). He was sentenced to 12 years in prison for covering the bloody suppression of Iranian dervishes’ protests in Tehran in early 2018.

Forbes, a member of the OFPC, notes that since then he has “spent a significant amount of time in solitary confinement, been moved multiple times, and his family is currently unable to communicate with him”.

Now, a full year later, his family are again desperate for an update on his case. Kasra’s mother has travelled to Shiraz in search of news; Pouria Nouri told IranWire on Sunday that the experience was a form of torture for her.

“She herself spent two years in prison,” he said. “She was tortured there, and lost her sense of smell permanently because of repeated blows to her head. Now imagine a woman in this state of suffering has to go from Tehran to Shiraz to look for her son, only to get no answers. They’ve inflicted so much pain on her and our family. We are exhausted and desperate.

“Simultaneously they want to pressure Kasra into silence. Through all these years he’s shown solidarity with the Iranian people speaking up and writing from prison.

“Every moment of the last three days has been tortuous. Every moment we’re waiting for our phones to ring and for Kasra to talk to us. But it hasn’t happened. Now every time the phone rings, my mother suffers more. The callers who ask about Kasra disturb her a lot, because she’s waiting to hear the voice of her imprisoned son.”

A Family Despised by the State

On February 19, 2018, violent clashes  broke out in Tehran’s Golestan 7 Avenue after a group of Gonabadi dervishes gathered outside a police station to protest against the arrest of a fellow dervish, Nematollah Riahi, a day earlier. Law enforcement later said 300 were arrested that day; among them were Shokoufeh Yadollahi, Kasra Nouri’s mother, and her three sons. They were sentenced to a combined total of 25 years in prison and were banned from gatherings and media activities for six years.

Amir Nouri was sentenced to six years in prison and 74 lashes. Pouria Nouri was sentenced to two, reduced to six months by the court of appeal. These two sentences were issued while Shokoufeh was being held in the notorious Qarchak Prison in Varamin, in poor health. She was tried in absentia and sentenced by Judge Abolghasem Salavati to five years in prison, a two-year travel ban and a two-year ban on the same activities.

As well as the blows to the head inflicted during her arrest, Shokoufeh endured broken ribs, and while in prison was hospitalized multiple times. The chief warden at Qarchak ordered guards to beat her and as a consequence, she went on hunger strike along with five other female inmates. Six months of being denied medical care led to her contracting a blood infection that in turn put her life in danger.

Being separated from Kasra, Pouria said, was intended to put more pressure on Shokoufeh and the rest of the family. “Kasra’s lawyers went to the Revolutionary Court and the prison to ask officials about him,” he said, “but they got no answer. My mother stood in front of the prison gate and said that she wouldn’t move until she heard Kasra’s voice; they promised her he’d be back in prison by noon and would call, but nothing happened, and we still don’t know anything about his situation.”

Ten Years Behind Bars for Speaking Out

Kasra Nouri himself was arrested in the middle of the Golestan 7 protests. In 2019 a Gonabadi dervished named Hadi told IranWire of what he saw that day: “Kasra was beaten to a pulp. Right before my eyes. I heard somebody behind me say ‘Kill this bastard!’; I turned and saw they were beating Kasra. They had tied his hands behind his back. They pulled up his hands and hit him. Then they threw him to the ground, a dozen of them jumped on him and beat him… I was frozen to the spot. I stood and watched.”

Kasra had been arrested several times before: first in 2011, after which he was held for 45 days but then released without charge, and then in 2012 for giving an interview with Radio Farda. A full 15 months in “temporary detention” later, he was brought before Branch 3 of the Revolutionary Court and sentenced to four years, four months’ imprisonment in Adelabad Prison, Shiraz.

Ultimately he was released on October 30, 2015, but rearrested again at the Tehran protests not two and a half years later. He was held initially in Greater Tehran Penitentiary, then sent back to Adelabad. This time, he was charged with leading the Golestan 7 protests and with taking part in Iran’s 2017-2018 mass demonstrations.

Judge Mashallah Ahmadzadeh of Branch 26 of the Revolutionary Court sentenced him to 12 years in prison, 74 lashes, two years’ enforced exile in Salas-e Babajani County in Kermanshah, a two-year travel ban, a two-year ban on the membership of any political or social, groups, parties or associations, and a two-year ban on media activities.

This is not the first time Kasra Nouri has been temporarily “disappeared” by the judiciary during his incarceration. In January 2021, in the middle of the coronavirus pandemic in Iran, Kasra was moved out of the facility without his family being informed. At the end of the month they learned he had been held for three days in a detention center in handcuffs and shackles, then sent on to Evin Prison. In March he returned to Shiraz.

“Kasra has been in prison for close to a decade,” Pouria Nouri said. “Throughout, they’ve moved him between various prisons to try to put more pressure on him, to break him. And throughout, his family has suffered alongside him. We are extremely worried about him.”