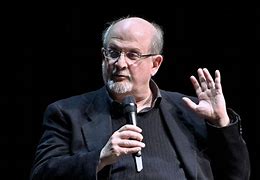 Speaking to the New York Post in a video interview from jail, Hadi Matar said he did not think Rushdie was “a very good person.”

“He’s someone who attacked Islam, he attacked their beliefs, the belief systems,” Matar was quoted as saying.

Matar was referring to Rushdie’s book, “The Satanic Verses,” which Iranian religious leaders and officials have repeatedly said was reason enough to call for his death.

Khomeini issued a fatwa to kill Rushdie in 1989. Multiple assassination attempts have been made on the Indian-born author’s life since. The most recent was last Friday when Matar attacked Rushdie in New York as he was ready to participate in an artistic freedom event.

Asked if Khomeini was the reason for his attack, Matar told the New York Post: “I respect the ayatollah. I think he’s a great person. That’s as far as I will say about that.” He added that he had only read “a couple pages” of Rushdie’s book.

But he admitted to watching YouTube videos of the 75-year-old Rushdie. “I saw a lot of lectures,” Matar said. “I don’t like people who are disingenuous like that.”

As for the attack itself, Matar said he took a bus to Buffalo, New York, the day before the attack and ordered a taxi to Chautauqua. “I was hanging around pretty much. Not doing anything in particular, just walking around,” he was quoted as saying.

He said he had slept on the grass the night before.

Since being arrested and sent to jail, Matar said he was “doing all right.”

Food has been an issue for him and his religion, he claimed. “A lot of the food they have given me is not allowed in my religion to eat.”