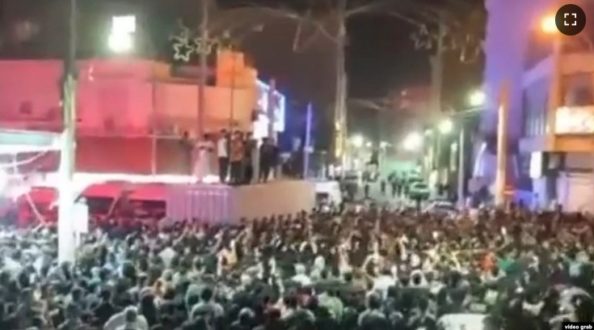 Iranwire – In the last half-decade, a greater degree of scholarly attention has been paid to street protests in Iran in their various forms. From the nationwide protests of 2017 until today, universities, government journals and think-tanks have published dozens of studies on the nature and direction of civil unrest in Iran, and what lies behind it.

The latest of these is a study published in the spring 2022 issue of the Iranian quarterly Political Strategic Studies, entitled Analysis of Social-Guild Protests in Iran from Perspective of Street Politics Theory. The authors examined the characteristics of workers‘ mass demonstrations from 2017 onward, and concluded that they were “intrinsically” different from past movements.

Grassroots Organizing and the Fading Out of Leadership

Before 2017, the study noted, most large-scale protests in Iran were led by unions and civic associations. These bodies now play an increasingly “secondary” role in part due to workers and unionists’ loss of trust in them.

At the same time, the study noted, the latest protests had no identifiable leadership, with fewer and fewer “middlemen” thus operating between the disenchanted people and the government. Instead, teachers, farmers, fishermen and others have taken to the streets spontaneously to express their discontent.

The study also pointed out that more recent protests in Iran have been buoyed along by the internet and social media, chiefly Telegram and Instagram. Despite the high level of internet filtering in Iran, these platforms have helped protesters mobilize and document events, but also for information-sharing and to increase the social awareness of their contemporaries in between protests.

As a result of this, and increased levels of political and social awareness in general, more young Iranians, teenagers, and people living on the margins have taken part in protests from 2017 onward.

A Rise in Radicalism

Since 2017, the study found, participants in protests of all types have increasingly been seen to break societal taboos in their political slogans and challenges to the government. The types of action taken, from the burning of banners to blocking roads, are more costly both politically and financially than once they were.

The more drastic measures have emerged concurrently with deepening crises in Iran, including unprecedented inflation, high unemployment, struggling public services and a widening ideological gulf between the citizenry and the ruling elite. Due again to the lack of trust in institutions, the street has now become the principal venue for expressions of anger.

Bonding Between Blue- and White-Collar Workers

In the second half of the 2010s, the study pointed out, after the students’ associations at respected Iranian universities publicly backed the struggles of labor and trades unions, a new horizontal bond began to form between blue- and white-collar workers.

This was strengthened by the November 2019 protests, which were originally sparked by a sudden, steep increase in the price of gas and the ensuing sharp rise of inflation. Lower-paid workers, being the worst-hit by the price hikes, are thought to have gone out to protest in particularly large numbers but were backed overwhelmingly by the new middle class.

The study’s authors took a different approach to most in not considering each fresh wave of protests as separate to the one that came before. Rather, they said, the protest movement that began in late 2017 – and happened to surge in November 2019 – had never ended.

Held up as examples were some of the long-running sets of demonstrations seen in recent years, including by farmers protesting the water crisis in Isfahan, and years of strikes by workers at the Haft-Tappeh Sugar Factory in Khuzestan. teachers in these two years prove this point. Workers and guilds have come to believes that they must not leave the street if they want to reach their goals.

The authors of the study took in 170 known demands issued by protesters at different rallies since 2017. Overall, they could be divided into six categories: 35.6 percent were economic in nature, 32.1 percent political, 12.3 percent social, 10 percent motivational, 5.4 percent environmental and finally, 4.1 percent legal.

They also analyzed 174 slogans heard at rallies and classified them in six categories. Of these, 41.5 percent were economic, 24 percent social, 18.5 percent political, 10 percent related to what was called “agents of conspiracy”, 3.5 percent legal, and 2 percent environmental. The largest number of political slogans attacked aspects of the regime – what the authors called “the existing political system” – followed by “corruption” and “the dominance of ideology”.

The study concluded that “the masses” in Iran were no longer content with remaining on the sidelines and watching political clashes play out. Instead, it found, ordinary people had become much more active players, seeking to influence decision-making or challenge the government through near-constant public interventions. “The street”, it said, showed the places where decision- and policymakers had deviated from the wishes of citizens and the poor.