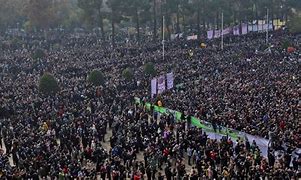 RFL/RE – Iranian pensioners and retired public employees showed no signs of letting up in their protests against what they say is the government’s failure to address deteriorating living conditions.

The recent wave of protests by pensioners and retirees comes after the government announced on June 6 that it would increase the monthly salaries of non-minimum-wage retirees by 10 percent, far below a previous pledge for a hike of 38 percent plus 5.15 million Iranian rials ($16).

Legislation to enact the increase was rejected by parliament, leading to the lower increase, which pensioners say is too little given that the inflation rate currently stands at more than 45 percent.

In recent weeks, Iran has witnessed protests from a broad cross-section of society, most of which have been met with security crackdowns, most notably after a round of nationwide teachers’ protests in May.

EMBED SHAREThe code has been copied to your clipboard.

The URL has been copied to your clipboard

The Iranian Teachers’ Union’s Coordination Council announced on June 26 that since then, a total of 230 teachers and union activists had been detained or imprisoned in various cities.

The council also said that over the past two weeks it had not received any information on the situation of three imprisoned teachers: Rasoul Badaqi, Mohammad Habibi, and Jafar Ebrahimi.

Devastated by years of harsh economic sanctions imposed by Washington since the United States pulled out of an accord with global superpowers aimed at curbing Tehran’s nuclear program, many Iranians have launched protests in recent months to decry the government’s inability to help their lives.

In addition, Iran’s economy has struggled to recover from the COVID-19 pandemic, which has left at least 2 million Iranians jobless and resulted in soaring consumer prices.