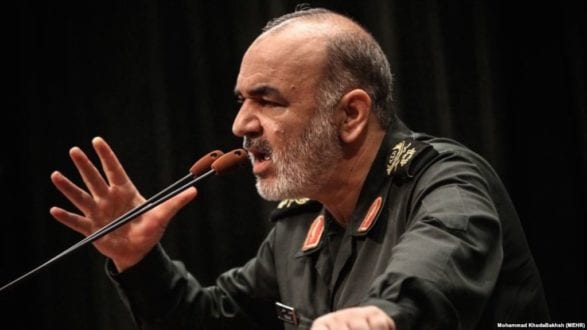 Iran’s IRGC says US is retreating from region

Al-Monitor – Commander in Chief of the Islamic Revolutionary Guard Corps (IRGC) Hossein Salami spoke about the United States and Israel in his latest speech.

“Our enemy is in a state of flight and defeat,” Salami said. “Today you see the news of the Zionist regime and how they are in a political collapse, and if you look at the US, it is thinking of an honorable exit and cannot stay in the Islamic world.”

Salami continued, “Today the enemy is depressed, withered and bored from pursuing its goals and is searching for an exit.” He said the United States did not think Iran would continue to resist it for 44 years and “with empty hands spread the Islamic revolution.”

He said the United States can continue to sanction Iran “so that medicine does not reach our boys and girls,” but everyone knows that “the enemy does not want good for us.” He also predicted that Iran will soon “be a part of world powers.”

President Joe Biden, after having criticized Saudi Arabia’s Crown Prince Mohammed bin Salman and vowing to make him a pariah, has retreated from his position and plans on meeting him during a trip to the region. It is not clear what will be discussed, but some observers believe Biden is hoping for more oil production in order to reduce gas prices for Americans. There has also been speculation that Biden would offer Saudi Arabia and perhaps the United Arab Emirates as well a security pact that would commit US troops. If true, this certainly suggests that rather than leaving the region, the United States would be committing to a longer stay.

The security pact would be to protect these countries from Iran or its proxies. While Iran and the Arab countries in the Persian Gulf are not at war, the tensions over Iran’s nuclear program and possible US or Israel military strikes could certainly put these countries in the crossfire. Biden campaigned on reentering with Iran the Joint Comprehensive Plan of Action, also known as the nuclear deal, but differences remain between the two sides. Meanwhile, the United States continues to add sanctions against Iran while Iran continues to increase its nuclear program and lower its cooperation with inspectors.