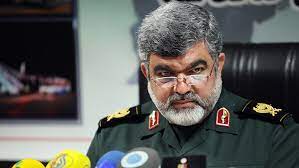 Kazemi replaces Hossein Taeb, a powerful cleric who held the post since the organization’s inception in 2009.

No reason was given for the change in leadership, which comes amid a series of assassinations and mysterious deaths of members of the IRGC as well as other individuals associated with Iran’s military over the past few weeks.

The most recent high-profile assassination was that of IRGC Colonel Sayyad Khodaei, who was killed in a gun attack in the capital Tehran on May 22. Iran blamed Israel for his killing and vowed to take revenge.

It was the most-high profile assassination inside Iran since the 2020 killing of nuclear scientist Mohsen Fakhrizadeh, which Tehran also blamed on Israel.

Taeb has been appointed as an advisor to the IRGC’s chief commander, state news agnecy Tasnim said.

Taeb is a powerful figure in the Iranian regime who worked at Supreme Leader Ali Khamenei’s office prior to being appointed as the IRGC’s Intelligence Organization in 2009. He is said to be particularly close to Mojtaba Khamenei, the supreme leader’s influential son.

Taeb is sanctioned by the EU and the US over human rights violations.

“I think this is an earthquake in Iran’s intelligence community given Taeb’s tenure’s longevity and his closeness to the Office of the Supreme Leader,” Jason Brodsky, policy director at United Against Nuclear Iran (UANI), told Al Arabiya English.

“Taeb’s legacy is one of corruption, repression, and controversy. The fact that he has been named as an advisor to the IRGC’s commander-in-chief rather than another more significant position can be seen as a demotion, assuming this holds,” said Brodsky.

Founded in 2009, the IRGC’s Intelligence Organization is an intelligence agency that operates parallel to Iran’s Ministry of Intelligence. The two intelligence services are said to be in competition with each other and have clashed in the past.

“The replacement of Taeb with Mohammad Kazemi, who previously headed the Intelligence Protection Organization (IPO), is a sign that the IRGC is concerned about penetration of foreign intelligence services in its ranks as the IPO’s mission is inward and focused on counterintelligence inside the IRGC,” said Brodsky.

“Kazemi is likely viewed as someone who can tighten the IRGC’s Intelligence Organization’s operational tradecraft amid multiple mysterious assassinations in Iran and sabotage incidents,” he added.

“Nevertheless, the question remains about Kazemi’s own skills given that he has been head of the IPO even while Iran experienced these multiple setbacks.”