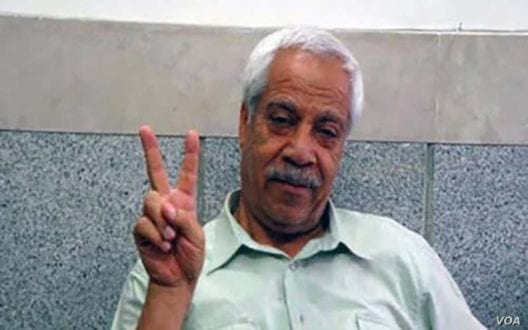 Iran-HRM – A political activist who is serving his prison sentence in Mashhad’s Vakil Abad Prison in northeastern Iran has been deprived of medical care. Prison officials have banned Hashem Khastar, who is also a teacher from receiving medical care outside of prison because he refuses to be transferred to the hospital with shackles on his hand and feet.

According to a source close to Hashem Khastar’s family, he is suffering from digestive problems and high blood pressure. He is kept in a cell with two other political prisoners, Kamal Jafari Yazdi and Mohammad Hossein Sepehri and they have been deprived of communicating with other prisoners.

“Due to his medical problems and the low quality of prison food, Mr. Khastar has resorted to eating fruits instead of food and has lost weight. He is 77 years old and has lost 25 kilograms since he was initially detained and has become very weak. Since he was transferred to Vakil Abad Prison, he has not received even an hour of furlough and despite his ailments, prison officials refuse to allow him a medical leave,” the source added.

Hashem Khastar was detained on August 11, 2019, by security forces. He was sentenced to 16 years in prison, 2 years of exile in Nikshahr, and a two-year ban on leaving the country on charges of “insulting the founder of the Islamic republic, blasphemy, insulting the Leader, agitating public opinion, cooperating with the foreign media and participating in illegal gatherings”.

In early August 2019, 14 civil rights activists signed a letter calling for the resignation of the regime’s Supreme Leader Ali Khamenei. A number of the signatories, including Mr. Khastar, were detained while others were put under pressure.