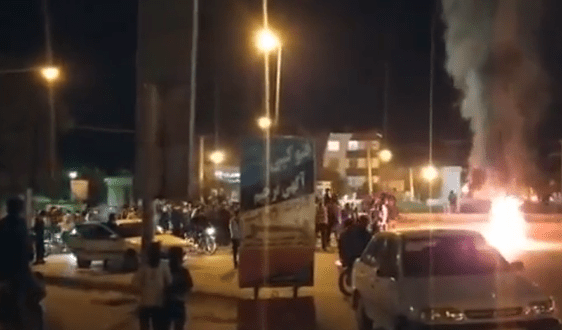 A new wave of nationwide protests was triggered last week by a cut in state subsidies for imported wheat that caused price hikes of as much as 300% for a variety of flour-based staples.

All sectors of Iranian society are being crushed under soaring inflation, rampant unemployment, meager wages, and widespread water shortages, as well as the Iranian regime’s repressive policies.

Speaking on May 9 on state television, Raisi pledged that the price of traditional bread, gasoline, and medicine would remain unchanged.

In order to compensate for the rise in prices, Raisi said direct payments equivalent to approximately $10 or $13 would be disbursed for two months for each family member of low-income households. Later, he said Iranians will be offered electronic coupons that would allow them to access a limited amount of subsidized bread.

Reports suggested that the price of cooking oil had almost quadrupled since Raisi’s announcement, while the price of eggs and chicken nearly doubled.

Following the recent protests in Iran, the state security forces, and riot police were dispatched to restive cities to confront the protests.

Though the exact number of people detained during the food protests in Iran is not known, reports indicate that hundreds of protesters, including children, have been arrested. The detainees are in danger of maltreatment and torture.

Video shows the state security forces arresting a protester in Tehran’s Karun district.
Hundreds of protesters including children have been arrested so far during #IranProtests over a recent price hike in food staples.
The detainees are in danger of maltreatment & torture. #Iran pic.twitter.com/z2vQQooT55— IRAN HRM (@IranHrm) May 15, 2022

According to the state-run IRNA news agency, at least 50 people have been arrested in the protests in Dorud, Lorestan, 15 in Dezful, Khuzestan, and seven in Yasuj, Kohgiluyeh and Boyer-Ahmad.

Social media reports, eyewitness accounts, and videos from the protests indicate that the state security forces resorted to unlawful use of force, including birdshot, gunfire, and mass arrests, in their ongoing crackdown on peaceful protests in several cities, leaving dozens of people injured.

May 14 – Chelicheh, SW #Iran
Pellet guns were used against protesters.
At least 5 protesters have been fatally shot by security forces during the recent #IranProtests over the skyrocketing prices of food staples. pic.twitter.com/8iAcDjhopL— IRAN HRM (@IranHrm) May 15, 2022

The state security forces used pellet guns on Saturday to quell #IranProtests in the city of Sureshjan, SW #Iran
Many civilians including children were wounded. pic.twitter.com/VUX8wlF20B— IRAN HRM (@IranHrm) May 15, 2022

An Iranian official admitted the killing of a protester in the southwest.

Ahmad Avai told the state-run ILNA news agency one person had been killed during rallies in Dezful, a city in Khuzestan Province.

This is while at least five protesters have been identified as killed by security forces in recent food protests in Iran.

The slain protesters are:

Behrouz Eslami, the father to two little boys, was shot dead by security forces on May 14 during protests in the city of Babaheidar, in Chaharmahal and Bakhtiari Province, southwest Iran.

Behrouz Eslami, the father of two, was killed by security forces last night during #IranProtests in Babaheydar, SW #Iran, according to @1500tasvir pic.twitter.com/l2MHdQXJQ5— IRAN HRM (@IranHrm) May 15, 2022

Sa’adat Hadipour was shot and killed by the state security forces on May 14 during the protests in Hafshejan, Chaharmahal, and Bakhtiari Province.

Sa’adat Hadipour was shot and killed by the state security forces on Saturday during #IranProtests in Hafshejan, Chaharmahal, and Bakhtiari Province, SW #Iran pic.twitter.com/7QBFNdWEPf— IRAN HRM (@IranHrm) May 15, 2022

Pish-Ali Ghalebi Hajivandi was shot by security forces on May 13 when he stuck his head out of his house’s window to see the nearby protests in the city of Dezful, Khuzestan Province.

Omid Nouri, 21, was killed by security forces on May 12, in Andimeshk, Khuzestan Province.

Social media reports indicate that Omid Nouri, 21, was killed by security forces in Andimeshk, SW #Iran during #IranProtests over a sudden sharp increase in the price of basic goods. pic.twitter.com/mYsVNsqZjp— IRAN HRM (@IranHrm) May 14, 2022

Hamid Ghasempour was killed by security forces on May 12, in Faresan, southwest Iran.

Social media reports indicate that Hamid Ghasempour was killed by security forces in Faresan, SW #Iran during #IranProtests over a sudden sharp increase in the price of basic goods. pic.twitter.com/Rfc11PJMvA— IRAN HRM (@IranHrm) May 14, 2022

In some Iranian cities, including Tehran, tight security measures are in place and a massive security presence is observed.

May 15 – Izeh, SW #Iran
Footage of anti-riot units patrolling the streets ready to crack down on possible #IranProtests over the skyrocketing prices of essential goods. pic.twitter.com/tvG5mPxXO2— IRAN HRM (@IranHrm) May 15, 2022

Since the beginning of the protests, the Iranian regime has shut off or severely limited the internet in Khuzestan Province and the restive neighboring cities.

The regime has implemented an internet blackout to crush protesters without the world knowing. Similar measures were taken in November 2019 that led to the killing of 1,500 protesters.

Internet blockage observatory NetBlocks on Saturday reported a disruption lasting hours on Iran’s MobinNet. “The disruption is the latest in a series of telecoms cuts amid protests,” NetBlocks said on Twitter.

The Iranian regime has a documented history of using lethal force against peaceful protests while blocking internet access to prevent the world from seeing the brutal crackdown.

Call for immediate action by the international community

State-enforced internet outages, the heavy presence of security forces, using unlawful force against protesters, and mass arrests in recent days, have raised concerns about the regime’s deadly crackdowns such as those of previous years. The Iranian regime has a documented history of using lethal force to crush peaceful protests while cutting off internet access.

Iran HRM urges the UN and international human rights organizations to take urgent action to secure the release of the detained protesters.