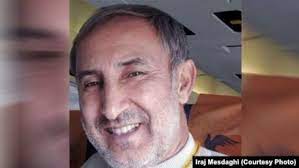 Iranwire – The 89th hearing in the trial of Hamid Nouri in Sweden took place on Thursday. During this session, prosecutors asked for him to be handed a life sentence for crimes against humanity. Nouri is charged with war crimes and murder due to his role s a senior prison official at Gohardasht near Tehran during Iran’s 1988 prison massacre.

From the outset of the trial, Nouri denied that he had been working at Gohardasht Prison at the time of the executions. He claimed that at that time he was an office worker at Evin Prison’s prosecutor’s office and, between 1986 and 1973, he had only visited Gohardasht Prison on “assignments”.

He also said the 1988 massacre was a “fantasy” that had been fabricated in a conspiracy between the opposition People’s Mojahedin Organization (MEK) and the “communists”. He added that if there had been executions, they were justified because they would have been executed for their participation in armed operations. Witnesses, former prisoners from all walks of life, begged to differ.

Who Is Hamid Nouri and Why Is He on Trial?

Born in 1961, Hamid Nouri is now 61 years old. As a young man he was a guard known to prisoners as Hamid Abbasi and was then recruited by the Islamic Republic’s judiciary as prosecutor’s assistant. In memoirs by former political prisoners, he is often referred to by his assumed name. Many of these former detainees are now witnesses for the prosecution.

But some knew Nouri’s real identity long before the trial. One was Rahman Darkeshideh, who was arrested at 16 in Iran for possessing written slogans against the war. He spent eight years in prison, including three in solitary confinement. “We were neighbors with Hamid Nouri…in Nezamabad, east of Tehran,” he said in his testimony in Stockholm District Court. “Our house was only three houses away from theirs and my brother Rahim was a friend and a classmate of Hamid Nouri. I myself was a friend of Bahman, Hamid Nouri’s younger brother.”

Nouri’s enthusiasm in working with the Iranian judiciary has not been lost on the Swedish prosecutor. During the court session when the indictment was presented, the prosecutor noted that when Nouri had applied for a job at the Revolutionary Court he had emphasized his passion for crushing the opposition.

The Indictment Against Hamid Nouri

The indictment presented on April 28 this year, more than seven months into proceedings, sought to underscore six points: that Gohardasht Prison was the site of some of the thousands of killings in summer 1988, who was executed there, that Nouri was who they said he was, that he defendant participated in the executions, the legal underpinnings for his arrest and the punishment sought by the prosecutor.

Based on the documentary evidence and expert as well as eyewitness testimonies, prosecutors held that Hamid Nouri and Hamid Abbasi were one and the same, and the charges brought against him are valid.

The well-known Iranian lawyer Mohammad Olyaeifard, IranWire’s long-time advisor on legal affairs who testified at the trial as an expert witness, pointed out that the fact Hamid Nouri has been in detention for close to two years is not uncommon in Sweden. “Had the prosecution not been confident of Hamid Nouri’s guilt, they wouldn’t have arrested him, nor extended his detention for this long. So in my view, this indictment and the proposed maximum penalty was predictable.”

In the trial session on April 28, the prosecution described Gohardasht as a “massacre factory” where all prison employees had to carry out their duties very swiftly and accurately, and nobody had the right to ask for a leave of absence. The prosecution referred back to the testimony of Abbas Rahimi, a political prisoner who survived the 1988 massacre, who had affirmed that was the situation.

The prosecution was of the view that employees of Gohardasht Prison were inundated with work during the executions and the overall responsibility for carrying out the lethal fatwa issued by Ayatollah Khomeini that summer rested with the three members of the so-called “death panel”, Judge Naserian (a pseudonym for the Revolutionary Court Judge Mohammad Moghiseh), Davoud Lashkarian, and Hamid Nouri.

The prosecution also confirmed that Gohardasht Prison was the location where the executions took place and said that even though detainees of Ghezel Hesar Prison, the largest state prison in Iran, were tortured in situ, they were moved to Gohardasht Prison to be executed.

Will Hamid Nouri Be Sentenced to Life?

The prosecution emphasized that Nouri was a deputy to Judge Mohammad Moghiseh and according to evidence heard at the citizen-led Iran Tribunal in the Hague, and memoirs by former political prisoner Iraj Mesdaghi, Nouri was at Gohardasht Prison during the mass executions of 1988.

The prosecutor also referred to testimonies by plaintiffs Mahmoud Royaie and Nasrollah Marandi and said that he is convinced that Hamid Nouri had played a decisive role in the atrocity: “Mahmoud Royaie names Naserian [Judge Moghiseh] and Hamid Nouri as individuals who from dawn to dusk were actively involved in executions. Also, in a video, Nasrollah Marandi names Naserian, Lashkarian and Hamid Nouri as active in the executions.”

In his defense, Hamid Nouri has repeatedly said that between two to four months during the time that the executions were taking place he was on leave because his wife had been pregnant. But the prosecutor said that, based on their investigations into conditions at the time, there was no possibility that prison officials had given him a leave of absence.

The prosecutor also referred to testimony by witnesses and said: “Siamak Naderi witnessed Hamid Nouri when he was searching prisoners’ belongings and another witness by the name of Abdolreza Shokouhi saw the defendant as he was removing a TV set from the ward. Hossein Farsi had seen the defendant while he was reading the names of those who were executed in ‘the death corridor’. Hossein Farsi has also testified that Hamid Nouri had been present when he was being beaten by Naserian.”

The prosecutor said there was no doubt that Hamid Abbasi and Hamid Nouri were the same person and asked for the maximum sentence. He added that, regardless of the verdict, Hamid Nouri must not be released on bail.

Asked whether the prosecution’s call for a life sentence would be accepted by the court or not, Mohammad Olyaeifard told IranWire: “The judges are not obliged to accept it. Therefore, rejoicing about it is a little premature. The important point at this juncture is how the judges are going to rule.”

But the plaintiff families and witnesses are rejoicing. At the very least, they know now that the prosecutor has found their testimonies reliable and believable. They have also learned that his phone calls and messages, Nouri always introduced himself as Hamid Abbasi but before traveling to Sweden, he had “deliberately” erased some information from his phone. They have been waiting 30 years for this day.

Mohammad Olyaeifard told IranWire he hopes Hamid Nouri will be sentenced to life imprisonment but “no matter what the verdict — the maximum sentence, 15 years or 20 years in prison — it will be a big step towards justice.”