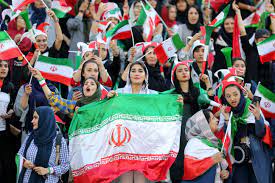 Iranwire – Iranian artists, sports stars and relatives of people killed in street protests have signed a joint letter to the Iranian national football team calling on players to boycott the 2022 Qatar World Cup if women are still not being allowed to attend matches in stadiums at home.

The missive is the latest public reaction to events in Mashhad on March 29, when security guards attacked women arriving watch a World Cup qualifying match between Iran and Lebanon with teargas and pepper spray.

The letter also referred back to the death of Sahar Khodayari, known as the “Blue Girl”, who in 2019 set herself on fire after she was prosecuted for trying to enter Azadi Stadium to watch a football match.

“Nothing has changed since then,” the letter asserted, “and now the misogynist regime of the Islamic Republic is throwing pepper spray into women’s eyes.” It concluded: “We ask the players of Iran’s national football team to stand with Iranian women in protest against the ruling degeneracy.”

Who Signed the Letter?

Among the letter’s best-known signatories are the singer Dariush Eghbali, playwright and theater director Niloofar Beyzaie, poet and songwriter Ardalan Sarfaraz, Mohammad Alee Payam, the poet and satirist known as “Haloo”, and Soleyman Vaseghi, the singer known as “Soley”.

There are also several Iranian professional athletes among the co-signatories, including volleyball players Iradge Ahrabi-Fard and Soheyla Farahani, Mostafa Arab, a former captain of the national football team, and Nosrad Kordbacheh of the national athletics team.

The letter was also signed by a group Iranians who have been persecuted by the Iranian regime for political reasons. They include Sakineh Ahmadi, the mother of Ebrahim Ketabdar, a young man killed during November 2019 protests, Farzaneh Ansarifar, whose brother Farzad Ansarifar was also killed in November 2019, and Giti Pourfazel, a lawyer who co-signed a now-infamous letter asking Ayatollah Khamenei to step down as Supreme Leader.

Footballers Past and Present Demand Better for Women

In the past few days, a number of current and past members of the men’s national football team have come forward to condemn the treatment of Iranian women in Mashhad. Among the current Team Melli stars were Alireza Jahanbakhsh and Karim Ansarifar.

Voria Ghafouri, captain of Tehran Esteghlal FC, Ali Daei, a former captain of Team Melli, and Javad Nekounam, fanother former captain and current head coach of Foolad FC, have also weighed in on the incident. Daei wrote on his Instagram page on April 3: “I hope the day will come when Iranian women and girls can freely and safely go into stadiums – and cry from joy because their favorite team has won, not because of pepper spray and tear gas.”