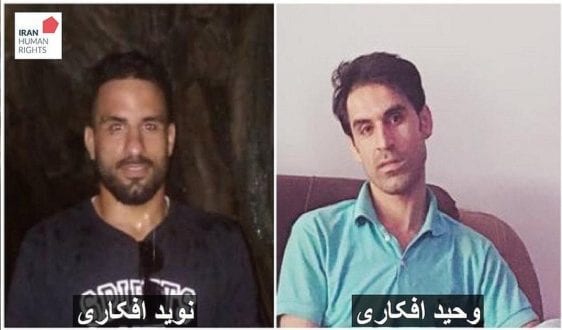 Iran-HRM – Saeed Afkari, the outspoken brother to executed protester and wrestling champion Navid Afkari wrote his brother Vahid was attacked in prison and has a broken hand, and his family was shot outside prison when they protested.

He wrote on his twitter on April 3, that the regime security forces opened fire on his family while they had gone to visit Vahid, who remains behind bars for unjust reasons. They saw that prison guards had broken Vahid’s arm.

“We realized that the guards wanted to transfer a political prisoner in Vahid’s cell to solitary confinement. Vahid began protesting to prevent them and the guards attacked to beat him in the cell. Vahid resisted for so long that they broke his arm,” Saeed Afkari wrote.

“When we saw that Vahid’s arm was broken, my brother Habib became angry and went out of the prison to find an official/anyone to protest to. We began shouting and the security guards began opening fire at us from atop the buildings,” he added.

“When we held our chests towards them and told them to open fire, they stopped shooting. But they did not allow us to see Vahid again. While we’re extremely concerned about Vahid, but our path is Navid’s path. We don’t fear death & swear they’ll regret it,” he said.