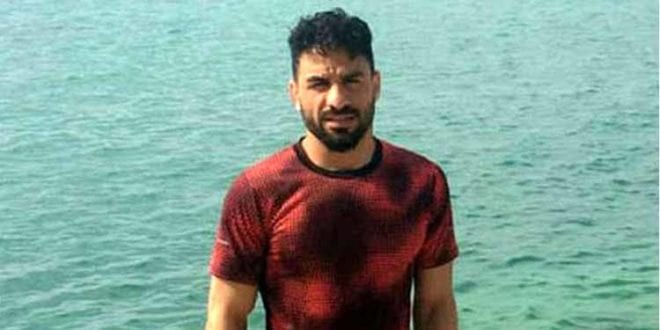 Iran-HRM – The Twitter account “1500 Tasvir (1500 Images)”, which covers news of those killed in the November 2019 protests in Iran, wrote Tuesday that Amin Bazrgar had been “repeatedly threatened by security forces for his support of Navid.”

According to 1500 Tasvir, Iranian Greco-Roman wrestler Amin Bazrgar even “told his friends several times that security forces were pursuing him.”

As reported, Amin Bazrgar “abroptly disappeared six months ago and to this day his family and relatives have not been able to find any trace of him.”

“Our silence is a betrayal,” Mr. Bazrgar wrote shortly before he “disappeared” on his Instagram account in support of Navid Afkari.

Sardar Pashaei, the former coach of Iran’s national Greco-Roman team who immigrated to the United States twitted: “#Amin_Bazrgar, a wrestler on the Iranian national team and the champion of international competitions, has been missing for 6 months. In one case, security agents went to the wrestling club and and asked for him. Now his family says they have no news of his fate.”

Speaking with The Jerusalem Post Pashaei said: “This is the situation of Iranian athletes. We either hear about their arrest, or their death sentence, or their disappearance. What we know so far about Amin Bazrgar is that he has been missing for more than six months and there is no news about his fate. What is worrying is that his relatives have confirmed that before Amin disappeared, several Iranian security agents went to the wrestling club and asked for him.”

Pasahei added “He was a student of Mohammad Ali Chamiani, the coach of Navid Afkari, and he trained in the same club. Since the execution of Navid Afkari and the international reaction, the pressures from the security forces on the athletes have increased. They do not tolerate the slightest protest. Those who write on their social media pages are immediately summoned and face threats and reprimands.”

Iranian authorities executed Navid Afkari on September 12, 2020, for a crime that his family, friends and human rights activists say he didn’t commit.

He was arrested after taking part in a protest in Shiraz on August 2, 2018​.

Those close to him acknowledge that he attended the protest, saying he was troubled by discrimination against women and the poor.

But his supporters say that his trial was devoid of any compelling evidence ​against him.​

​Afkari and his brother Vahid were arrested a month and a half later, on September 17 according to the UN, and another brother, Habib, was rounded up later that year.

Both of Afkari’s brothers were ​convicted of charges in relation to events at protests, and Vahid was deemed to have been “accessory to murder,” according to Amnesty.

Navid was condemned to death while Vahid and Habib received prison sentences of more than 33 and 15 years respectively. All were to be punished with 74 lashes each, according to Amnesty.