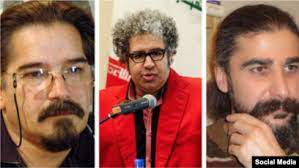 Iranwire – PEN America has called for the immediate release of jailed writer Baktash Abtin after it emerged he had contracted severe Covid-19 in prison.

Abtin was summoned to Evin Prison last September to begin his sentence alongside two other senior members of the Iranian Writers Association, Keyvan Bajan and Reza Khandan Mahabadi. He has had Covid-like symptoms twice and this time has been moved to hospital and onto a ventilator.

Summer Lopez, PEN America’s senior director of free expression programs, said: “We urgently demand Abtin’s immediate release, so that he may receive the medical care he needs. This moment makes starkly clear the extreme dangers posed to Abtin and his fellow writers detained in Iran’s prisons. The egregious violation of their rights must end and Abtin and all those unjustly behind bars must be immediately and unconditionally released.”

The three authors are facing a collecting 15.5 years in prison for “acting against national security” and “propaganda” based on their peaceful promotion of the Writers Association. In October this year, PEN America named the three winners of its annual Freedom to Write Award, describing them as “writers who are called not only to offer prose and ideas on a page, but to live fearlessly—and sacrifice immensely in service of the liberties that underpin free thought, art, culture, and creativity.”