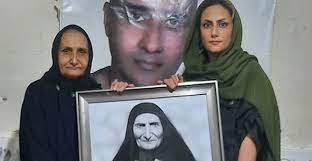 RFL/RE – For nine years, Gohar Eshghi has been grieving and seeking justice for the death of her son, Sattar Beheshti, an Iranian blogger who died in police custody in 2012.

But Eshghi’s fight to bring the perpetrators to justice has put her and her family directly in the authorities’ crosshairs.

On November 3, Eshghi and her daughter, Sahar Beheshti, were arrested in the family’s home in Rabat Karim, a city about 30 kilometers southwest of the capital, Tehran.

Their arrests came just hours after Eshghi sent a video to RFE/RL’s Radio Farda in which she condemned what she called widespread human rights abuses in the Islamic republic. Eshghi shared the video on November 3, which coincided with the ninth anniversary of her son’s death.

“It’s been 43 years that the Islamic republic has been killing our youth,” Eshghi said in reference to the Islamic Revolution in 1979 that toppled the monarchy and brought Islamists to power. “They took away my Sattar, they killed him, and then they buried him,” said the 75-year-old, holding a framed photo of her son.

Eshghi, who has no formal education, said she would not give up her struggle for justice even in the face of state pressure. “[The Islamic republic] has attempted to dissuade me but my God and the God of my child have not allowed it,” said Eshghi, who has been wearing black since her son’s death.

Human rights groups have condemned the arrest of Eshghi and her daughter. Amnesty International on November 4 called on Iranian authorities to release the women “immediately and unconditionally.”

“The illegal and arbitrary detention of Gohar Eshghi and her family once again reveals the crisis of impunity in Iran, where cases of torture and murder in detention are accompanied by the constant harassment of mourning relatives seeking justice,” the London-based rights group said.

The Iranian authorities have not publicly commented on the arrests.

The 35-year-old Beheshti, a little-known blogger, was arrested in his home in Rabat Karim on October 30, 2012, on charges of “actions against national security on social networks and Facebook.”

Beheshti’s family was informed of his death on November 6. The family said he was hastily buried and that they were prevented from seeing his body.

Iranian authorities later confirmed that he had been beaten in custody. A prosecutor said that the cause of Beheshti’s death was most likely physical or psychological shock.SEE ALSO:Mother Of Iranian Blogger Who Died In Prison Calls For Public Investigation

His death led to several arrests and the dismissal of the head of Tehran’s cyberpolice. In 2014, a court sentenced a police officer to three years in prison after convicting him of involuntary manslaughter.

Eshghi’s lawyer said the sentence was lenient, considering the serious nature of the crime. Eshghi has called for an open investigation and demanded that the police officer be charged with premeditated murder.

In a recent video uploaded on social media, Eshghi said she held Supreme Leader Ayatollah Ali Khamenei responsible for her son’s death. “The leader is the murderer of my child, I will never forgive him,” she said.

Criticism of Khamenei is widely considered a red line in the Islamic republic, although a growing number of activists have publicly challenged the supreme leader in recent years.

In recent years, Eshghi has issued numerous video statements and letters in her persistent struggle for justice, becoming a prominent symbol of resistance against alleged state repression in Iran.

She has also joined other mothers who have lost their children at the hands of the state to push for accountability and justice.SEE ALSO:Grieving In Iran: Mothers Brought Together By Tragic Deaths, State Pressure

Eshghi was among a group of women who met with former EU foreign-policy chief Catherine Ashton during her 2014 visit to Tehran.

Human rights activist Narges Mohammadi, who was part of the group, said that Ashton had embraced Eshghi and wept.