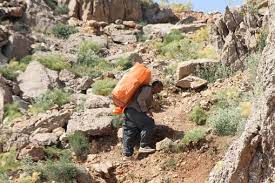 Iranwire – A kolbar from the city of Sardasht in West Azerbaijan was shot dead by Iranian border police on Thursday, October 14. Jian Alipour’s family and relatives, many of whom live abroad due to pressure from the Islamic Republic’s security institutions, told IranWire that the father-of-two had been repeatedly threatened by the commander of Bitush Border Regiment for two months prior to the killing. His brother, Houshmand Alipour, is also being held as a prisoner of conscience in Sanandaj.

Last Thursday evening, Jian Alipour and another kolbar were on their way out to Iraqi Kurdistan laden with goods when Iranian border troops opened fire on them. The incident took place near the Gaki River in Alan Rural District, Sardasht. According to an eyewitness, a bullet from behind ripped open Jian Alipour’s chest and pierced his heart. His fellow kolbar escaped the scene under cover of darkness, while border guards also shot and killed three kolbars’ horses in the area.

Jian Alipour was 32 years old. He leaves behind a wife and two young children, aged just four and nine. He lived in the border village of Mazanabad in Sardasht, and had no occupation other than kolbari.

Another kolbar, who was part of a group that found Jian Alipour’s body in the foothills near the river, told IranWire: “Jian’s colleague called his wife’s family on his cellphone at around 8pm. He told them Jian had been shot, and he might be injured, but didn’t know anything more. His wife’s family immediately contacted the commander of Bitush Border Regiment, a Mr. Mousavi. He initially said he was unaware of the issue. But when he found out a number of villagers were going to the Gaki area, he warned them that if anyone else went to Gaki, they would be shot at.”

The commander based at Bitush, a village in Sardasht County, the local source claimed, had acted in a contradictory manner from the very beginning with regard to Jian’s shooting. “When we got to Gaki, Mousavi had already arrived with a number of troops under his command. When the family had spoken to him on the phone, he denied the shooting. But in Gaki, he instead kept repeating that no body had been found “nearby”. We didn’t answer him, and he knew that if he stopped us there’d be a fight. So they left the area while we searched for the victim.”

He went on: “First, we found the carcass of Jian’s horse. Based on our knowledge of Jian he ought to have been somewhere nearby, but unbelievably, we found his body about 1000 meters away. A bullet hit him in the back and shattered his chest.” It looked, he said, like the shooting had taken place at close range.

Locals, relatives and friends of the Alipour family were devastated after news of Jian’s death spread. “Jian’s body was brought in front of the Bitush Border Regiment building,” the kolbar said. “People threw stones at the building in rage and asked Mousavi to come out and be held accountable. But the Border Regiment fired shots to disperse the protesters. A number of people were injured; two bullets also hit a car belonging to a Bitush resident and punctured the tyres.”

Relatives of the Alipour family say Jian’s body was finally taken to Imam Khomeini Hospital in Sardasht at around 11pm on Thursday night. But after he was pronounced dead by medics, the hospital administrators asked for Jian to be buried immediately that same night, leading the family to suspect they were under pressure from the city’s intelligence officials. “Hundreds of residents of Sardasht and villages in the area were present at the hospital complex,” a source said. “But the Alipour family told the hospital they would not be taking the body until the Friday morning. They refused to bury their loved one at night.”

On Friday morning, Jian Alipour’s body was buried in the presence of his family and hundreds of residents of Sardasht and surrounding villages in Bitush cemetery.

“Tonight Will be the End for Jian”

A resident of Mazanabad told IranWire that Jian had been the subject of sustained threats from the commander of Bitush Border Regiment before he was killed. “About a month ago, Mr. Mousavi threatened to kill Jian at a gathering of Mazanabad residents that included the council and the mayor. He went so far as to tell him that it would be better for him to leave Mazanabad forever, so his children would not be orphaned.”

The same source said that Mousavi had even told people in advance of his intention to kill him on the Thursday afternoon. “At about 2pm, several residents of Ashkan village went to a checkpoint under the command of the Border Regiment to get permission to fish in the Gaki River. But the commander, contrary to the usual procedure, didn’t allow them to do so, and instead asked them about Jian Alipour and his [kolbari] route. They said they had no idea, but Mr. Mousavi didn’t seem to believe them. He told them, without hesitation: ‘Tonight will be the end for Jian Alipour.’”

Hejar Alipour, Jian’s other brother, who now lives in Canada, told IranWire of his brother’s death: “We still can’t believe we’ve lost Jian forever. He spoke to my father just last week and was preparing to finally join us, and to leave Iran forever.”

In recent weeks, he said, Jian had spoken to them many times about pressure and threats from the commander of Bitush Border Regiment. “Jian described the details of Mousavi’s threats to us. We asked him to get ready to leave given that his job was in jeopardy, and because we could no longer bear the anxiety.”

The wider family has a history of being targeted by the regime for political activities. “In 1977,” Hejar said, “my father and I were arrested by Sardasht Intelligence on charges of collaborating with Komala, the Kurdistan’s Organization of the Communist Party of Iran. My father and I denied the allegations and were released a few days later. But after our release, Jian was detained and tortured for another three days to get him to confess to fabricated scenarios. In the end, though, he refused and was also released.” On Saturday, he said, Jian’s father-in-law and brother-in-law had filed a complaint against Bitush Border Regiment.