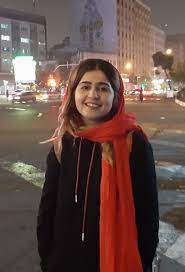 ‘Threatened With Death And Rape’: Iranian Activist Back Behind Bars After Exposing Prisoner Abuse

RFL/RE – Since she was first jailed in 2018 for covering labor strikes at a local sugar factory, journalist and activist Sepideh Gholian has become somewhat of an expert at exposing the torture tactics she has witnessed in prisons throughout Iran.

Now the 26-year-old’s experiences, drawn from her incarceration at detention facilities and four notorious penitentiaries around the country, has landed her back in a familiar place — prison.

Gholian was on medical furlough after contracting COVID-19 when a large team of security agents stormed her family’s home in the western Khuzestan Province on October 10, arrested her, and took her into detention.

Gholian’s lawyer, Amir Raisian, wrote on Twitter on October 13 that his client called her family after two days and said she had been taken from the provincial capital, Ahvaz, to the port town of Bushehr, and from there to Tehran’s notorious Evin prison.

Gholian’s lawyer said his client was transferred to the Tehran facility for “investigation and interrogation.”

As she has been transferred from prison to prison over the years Gholian has specifically requested that she not be sent back to Evin prison where, she told RFE/RL’s Radio Farda in an interview last month, she had been “threatened with death and rape many times.”

Her arrest came just days after Gholian posted an image of a summons for her to face charges of “spreading lies and propaganda” online against the Iranian government.

While the Iranian authorities have not officially made the connection, Gholian’s arrest and transfer to Evin prison appears to be related to a series of tweets she posted on September 9 in which she documented what she said was rampant prisoner abuse during her time at Bushehr Central Prison.

In posting the summons she received from the local prosecutor’s office, Gholian wrote on September 22 that “the Islamic Republic has once again proved that its answer to truth and justice is repression and revenge.”

Just a day before she was summoned to face fresh charges, she expounded on her claims of prisoner abuse in an interview with Radio Farda in which she said she felt as if she had seen the “ends of the earth.”

“I came to believe that there really might be such a place, because I have been in a public prison ward” in Iran, said Gholian, whose journey through the country’s penal system began at a detention facility in her home province of Khuzestan after her arrest along with other activists during the protests at the Haft Tappeh Sugar Factory.

Oil-rich Khuzestan is home to Iran’s Arab minority. The community has long complained of discrimination and say they do not benefit from the province’s wealth.

In her tweets, Gholian wrote that inmates at the women’s ward of the Bushehr facility are subjected to the “most savage forms of torture, and are kept in the most inhuman conditions, and their crime is simply that they are women and inmates.”

She then posted five separate accounts to back up her claims, including collective punishments for rule violations, being forced to strip naked in front of inmates and prison workers, psychological pressure, forced temporary marriage with male inmates, and coerced sex with guards.

Since then, she has been bounced around, starting with Sepidar prison in Khuzestan. While the right to be incarcerated in one’s region of residence is enshrined in Iranian law, Gholian told RFE/RL that she had been transferred four times in the space of 30 months with no explanation and despite her requests that she be allowed to serve her sentence within traveling distance of her family.

In addition to Sepidar, she has served time in Evin prison; the Qarchak facility southeast of the capital, considered the worst women’s prison in Iran; Bushehr; and now, back to Evin.

Gholian told RFE/RL that she was fearful of returning to Evin prison and said she had alerted the authorities of the threats she had received there.

“Many times, when I put my head on the pillow, I felt that I would be killed by tomorrow,” Gholian said in the September interview. “It is the same now. When I met with the Evin prison judge I told him: ‘If you send me back, just know that I will be killed there if the situation is the same.”

She said that her notoriety in the media and as an activist might have spared her the harshest treatment, but she was not exempt from routine abuse. She described being grabbed by her hands and feet and kicked and punched by guards. At times Gholian, who has been studying Iran’s Islamic law while in prison, was sent into “quarantine” merely for exercising her rights.

“As a prisoner, I have the right to lodge complaints” about prison conditions, she said. But the reality was very different.

For example, she said: “Say I come and ask why there is no water. The security guards are brought in to beat me. They take me to solitary confinement. All this happened while I was there.”

She also expounded on some of the obscure forms of collective punishment she described in her controversial tweets about Bushehr.

The wearing of underwear is mandatory for all prisoners, she wrote. But after one woman refused to wear a bra day and night all of her fellow inmates were forced to surrender their undergarments.

“At roll call, and in front of the horror-stricken eyes of the other female inmates,” she wrote, the guards tore her clothes off. “The inmates continued to pay for [the prisoner’s] refusal. They lined everyone up and forced them to take their bras and underwear off and put them in a trash bag.”

“From that point on, wearing undergarments was prohibited for weeks, even when the women had their period,” Gholian wrote.

In another case, a woman who used a bottle of mineral water to shower when not allowed was taken to the prison yard, stripped naked, and doused with milk and mineral water in front of other inmates and guards.

“It is said that a woman’s ‘human dignity’ must be preserved,” Gholian told RFE/RL. “But the same woman is stripped naked during roll call.”SEE ALSO:Women Share Stories Of Sexual Abuse In Iranian Prisons

She said that a “woman’s human dignity is trampled on with all her being” when stripped naked in front of others, and that while she has written hundreds of letters to the authorities, including Attorney-General Mohammad Jafar Montazeri, about the incident, none has been answered.

“I have described all the issues in such a way that there is no need to talk to the prisoner at all,” she said. “I have mentioned the exact date of the incident so that they can go [check the security-camera footage] and see how the prisoner was stripped naked and bathed in mineral water and milk.”

This is far from the first time Gholian has gone public with accounts of abusive treatment against her or other prisoners in Iran, which international rights watchdogs routinely criticize for its systemic use of torture, political repression, the execution of minors, and other crimes against humanity.

Gholian was arrested along with about 20 activists, protest organizers, and workers during the Haft Tappeh Sugar Factory strike in November 2018. But while most were released on bond the next day, Gholian was imprisoned for a month.

Her release from prison in Ahvaz was short-lived. After Iranian state television aired footage in January 2019, in which it purported to show Gholian confessing to taking part in alleged Western-backed efforts to overthrow the government, she promptly countered on social media by saying she had been beaten and forced to make a false confession.SEE ALSO:Iranian Activist Jailed, Allegedly Beaten, After Complaining Of Forced Confession

The next day, her father, Khodarahm Gholian, told RFE/RL that security forces arrived at the family home to take both Sepideh and her brother Mehdi away. Khodarahm Gholian said Sepideh and Mehdi were severely beaten before being thrown in a vehicle, and that the officers also beat him and his wife.

He told RFE/RL that, upon his daughter’s release the previous December, authorities warned they would “burn her to ashes” if she spoke out.

Based on her alleged confession, she was sentenced to 18 years in prison, after which she was released on bail in October 2019 after going on a hunger strike that prompted Amnesty International to raise concerns.

While out of custody, Gholian wrote a memoir about her time in Sepidar prison that was published by Iran Wire in July 2020. The personal account — broken into 19 vignettes that describe discrimination against Arab inmates, forced shavings, rape, and other abuses — has since been published as a book, Tilapia Sucks The Blood Of Hur al-Azim.