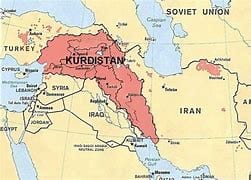 VOA – Iran is threatening to expand a bombing campaign targeting rebels in border villages of Iraq’s autonomous Kurdistan region, saying Iraqi Kurdish authorities must expel the rebels or the offensive will broaden.

Since the beginning of September, Iran’s forces have been carrying out attacks using artillery and drone strikes on border villages accused of harboring Iranian Kurdish rebels. Tehran said it aims to dismantle the militant groups, which are accused of staging attacks on Iranian territory.

“The position of the Kurdistan Regional Government is that it condemns this bombing and activities that lead to it,” Dabagh said.

He added, “We are trying to resolve this through diplomacy, negotiation and communication.”

On Sunday, Mohammad Bagheri, chief commander of Iran’s armed forces, directly accused the United States of supporting the Kurdish insurgents and demanded the closure of Harir air base, which houses American troops near the Kurdish capital’s Erbil International Airport.

The airport in Erbil has come under assault several times in recent months, including an attack by explosive-laden drones on September 11. While Kurdish authorities are yet to announce the group responsible, U.S. officials have blamed previous attacks on Iran-backed Iraqi Shiite militias.

In his statement on Sunday, Bagheri warned that the Kurdistan region should not allow armed “anti-revolutionaries,” who are “agents of America and the Zionist regime in northern Iraq, to have military bases, radio and TV stations and attack our borders,” according to London-based broadcaster Iran International

Iranian Kurdish officials reject the accusations of foreign backing and say the Iranian government, emboldened by the U.S. withdrawal in Afghanistan, is trying to increase its grip on Iraq and the Kurdistan region.

“Let Iran’s Islamic Revolutionary Guard Corps provide one evidence, a single proof, that the forces of West Kurdistan, in any trench or location, have engaged in a military activity against them,” said Omar Balaki, a leader of Iran’s Kurdistan Democratic Party.

“The regime of Islamic Republic, since its establishment, has always attempted to create international crisis to cover up its internal problems,” he told VOA.

According to Kawa Bahrami, a commander of Peshmerga forces of the Kurdistan Democratic Party of Iran, the Iranian armed forces since the beginning of this month have attacked border villages of the Kurdistan region with artillery and drones at least 15 times.

Bahrami told VOA via phone that the attacks have caused major damage to farms of villagers in the area.

“Fortunately,” he said, “there was no human casualty among us or the civilians because (Iranian Kurdish) Peshmerga forces do not have a stationary base in the region.”

Iran’s Kurdish minority rebel groups have for decades staged an armed insurgency against Tehran, saying they are denied basic cultural rights. The rebels have been able to survive Tehran’s armed pressure by taking shelter in the ungoverned mountains on Iran’s and Iraq’s borders.

Alex Vatanka, director of the Iran program and a senior fellow of the Frontier Europe Initiative at the Middle East Institute, argued that Iranian authorities needed to seek peaceful means to resolve the Kurdish issue in the country.

“The fundamental solution, which the authorities in Tehran refuse to acknowledge, is that there are genuine grievances among Iran’s minority community, including the Kurds of Iran. There are about 10 million of them.”

Iran’s failure to address the problem, according to Vatanka, has fueled resentment, with “a very small part of it” being expressed in militant forms.

“That’s where the solution to Iran’s Kurdish problem is. But the Iranians don’t want to go there for whatever reason it is. They’re trying to sort of deal with the issue by managing the problem, as opposed to trying to solve the problem, which would be the ideal thing to do,” he said.

Ahmed Zebari contributed to this report from Erbil, in Iraq’s Kurdistan region.