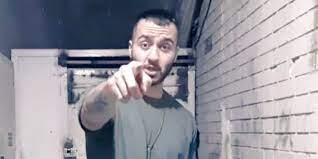 RFL/RE – With lyrics that criticize Iran’s Islamic establishment — condemning state repression and injustice — rapper Toomaj Salehi has gained fans among Iranians who are angry at the country’s leadership.

His lyrics also have upset Iranian authorities, who ordered his arrest earlier this month.

Salehi was aware that he could be targeted by the Iranian regime for his lyrics. Days before his arrest, he wrote on Twitter that he was being monitored and risked the wrath of Iranian security agents.

On September 13, a dozen security agents arrived at Salehi’s home in the central Iranian city of Isfahan and took him to an unknown location, according to his relatives.

The rapper was released on bail on September 21 amid widespread condemnation of his arrest by his supporters and by rights groups.

Amnesty International said that Salehi was targeted “solely for exercising his right to freedom of expression.”

Iran’s authorities must immediately and unconditionally release #TomajSalehi, a dissident rap artist detained solely for exercising his right to freedom of expression. In his songs, he spoke out against repression, corruption, poverty and impunity & called for accountability. pic.twitter.com/Nc8fVcBtom— Amnesty Iran (@AmnestyIran) September 17, 2021

In an online video posted after his release, Salehi said he was overwhelmed by the support he has received while he was in custody.

“I just wanted to thank all of you for having been my voice. When I was [in detention], I kept wondering who was even thinking about me right now. But when I was [released], I realized [that I had been wrong],” he said.

Thanking his supporters, Salehi promised to he would speak more with his fans in the future.

“I broke my cell phone during the arrest. We’ll speak when I get a new one later,” he said in the video.

Salehi did not provide details about his arrest or the charges he faces.

Earlier this week, Salehi’s lawyer said the rapper was charged with “spreading propaganda against the state.” It is a vague charge often brought against activists, intellectuals, and dissenters that Iran’s clerical establishment wants to silence.

Attorney Amir Raeisian told the news site Rouydad24 on September 20 that the charge had been “informally” announced to Salehi’s father.

Salehi has gained notoriety for lyrics that rail against corruption, widespread poverty, state executions, and the killing of protesters in Iran.Here people are only alive. They don’t have a life. Our children sleep hungry at night. Excuse me, but how does your conscience sleep at night?”– Rapper Toomaj Salehi

His songs also highlight the widening gap between ordinary Iranians and the country’s leadership, accusing authorities of “suffocating” the people without regard for their well-being.

His angry lyrics resonate among Iranians who are increasingly discontent and alienated by Iran’s clerical establishment — and by the politicians who fail to keep their promises of change.

Salehi has shared his songs on his Instagram and Twitter accounts. But those accounts became inaccessible while he was in custody.

In one song called Normal, he refers to Iran’s troubled economy, which has been crushed by U.S. sanctions and years of mismanagement.

Rapping in the Farsi language, he says:

“Here people are only alive. They don’t have a life. Our children sleep hungry at night. Excuse me, but how does your conscience sleep at night?”

Many Iranians blame the country’s leadership for economic pains that include high inflation and rising food prices.

Many are also angry at the lack of accountability over the state’s November 2019 crackdown on anti-establishment protesters. Several hundred people were killed in that crackdown, including children.

Iranians also are angry about the January 2020 downing of a Ukrainian passenger jet by Iran’s military that killed 176 people.

“Yes, yes, sir. Life is normal. We don’t want our rights, lest it be a crime. Sir, have you seen the underlings? The empty tables? You have so much light. Have you seen the dark city? We are the dead who can’t think of dying ’cause we don’t have money for burials and tombstones.”

In his latest song, titled Rathole, Salehi criticizes Iranian journalists, artists, and others — both within and outside of the country. He suggests they are complicit and enable the Iranian regime when they turn a blind eye to its human rights abuses. He tells them to “hide in a rathole.”

“If you saw people’s pain and closed your eyes, if you saw oppression of innocents and just walked by, if you did it out of fear or for your own gain, you’re an ally of the tyrant, a criminal just the same. Without your cover-ups, this system’s incomplete. Iran has enough prisons to hold all of you.”

Salehi also uses vulgarities to criticize the Iranian regime’s ties with Russia and China, including a 25-year cooperation agreement between Tehran and Beijing that many Iranians describe as selling out to China.

Many Iranians used social media to protest Salehi’s arrest and to call for his release.

Self-exiled Iranian dissident rapper Hichkas, known by fans as the father of Persian rap, told more than 300,000 of his followers on Twitter that Salehi is “defying the Islamic Republic” as “the voice of his people suffering under the Islamic Republic’s rule.”

Toomaj Salehi @ToomajSalehi , an Iranian rapper defying the Islamic Republic, has been arrested by IR forces in #Iran . Please be his voice, as he has been the voice of his people suffering under the Islamic Republic’s rule. #FreeToomaj #توماج_صالحی https://t.co/ta6uUagfAq— Hichkas (@HichkasOfficial) September 14, 2021

Iran has a record of targeting artists and intellectuals that don’t follow the official line and touch on topics deemed as sensitive.

Most Iranian rappers publish their music without approval from Iran’s Ministry of Culture and Islamic Guidance, the branch of the regime that regulates artistic work and enforces strict censorship rules.

Several rappers have been detained in recent years, while others have chosen to live in exile.

Last year, the popular and controversial Iranian rapper Tataloo was detained in Turkey after Interpol issued a “red alert” notice for him on the basis of an Iranian arrest warrant.

Tataloo had been critical of Iranian authorities. He was later released by Turkey.