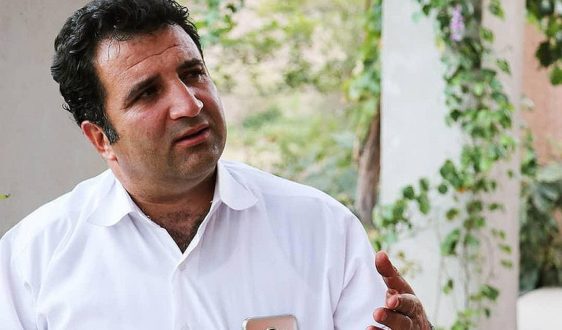 Iran Human Rights (IHR) – Imprisoned lawyer and human rights defender, Mohammad Najafi, suffered a heart attack on August 1 and has so far been denied medical furlough or treatment outside the prison despite official promises.

According to information obtained by Iran Human Rights, Mohammad Najafi, a lawyer and human rights defender suffered a heart attack in Arak Central Prison on August 1 and was transferred to Amir Kabir Hospital in Arak.

“On August 1, Mohammad Najafi’s lawyer, Arash Keykhosravi, informed his family that he had become ill in prison and taken to the hospital. After following up at the prison and being insulted by the prison officials, they were informed that Mr Najafi had been transferred to the Amir Kabir Heart Hospital,” an informed source told IHR.

“Mr Najafi was returned to the prison that same night and was told that he would be sent to the hospital for a diagnosis and treatment over the coming days. However, it’s now been 22 days and each time they’ve postponed transferring him to the hospital. His family have also been applying for medical furlough for him. In response, the prosecutor told Mr Najafi’s family that the province’s head of judiciary will be personally making the decision after forming a council to grant him 15 days of medical furlough after the holidays. The holidays ended two days ago but there’s no signs of the medical furlough or treatment outside the prison,” the source added.

The hearing for the new fabricated charges against Mr Najafi which was due to take place on August 15 was also postponed for the second time. He is facing charges of “propaganda against the system by making a video promoting the boycott of the elections and signing a statement calling for a referendum on dissolving the constitution and dismissing the leadership” which has become known as the 231 person statement.

Mohammad Najafi was arrested in January 2018 while investigating his most notorious case, the suspicious death of Vahid Heydari in custody. While officials had claimed Vahid was a drug dealer who had committed suicide in custody, Mohammad’s investigation revealed that he had in fact been arrested at a protest in Arak in December 2017 and there was physical evidence to suggest he had died under torture in prison, and he shared his findings on Instagram. Officials claimed that Mohammad been arrested as one of the organisers of the protests but failed to obtain any evidence to back the allegation and he was released on a bail of 1 billion Tomans in April 2018. In late July 2018, he was sentenced to three years in prison and 74 lashes for, amongst other accusations, “slander with intent to disturb public opinion” in relation to the Vahid Heydari case. The sentence was upheld by the Court of Appeals in October 2018. In December 2018, Mohammad’s lawyer announced that his flogging sentence had been suspended due to his diabetes. He was re-arrested without a prior summons at his home on 28 October 2018 and taken to Arak Central Prison.

In November 2018, Mohammad was sentenced to 10 years in prison on charges of “aiding an enemy state” for giving interviews to foreign media, two years for “insulting the Supreme Leader with ‘down with dictator slogans’” and one year for “propaganda for opposition groups and organisations”, by Branch 1 of the Arak Revolutionary Court. Mohammad’s 13-year sentence was upheld by the Court of Appeals in April 2019. He also has a ten year conviction from a previous case.

In a separate case tried at Branch 102 of the Arak Criminal Court in November 2018, he was sentenced to one year in prison for “publishing falsehoods in cyberspace with a phone and computer with the intention to disturb public opinion.” Branch 102 sentenced him to another two years of imprisonment in January 2019, this time for “disturbing the public mind” through an open letter, criticising Supreme Leader, Ali Khamenei. He was sentenced to a further six months in prison on 7 February 2020 by Branch 23 of the Tehran Revolutionary Court for making a speech at the home of the mother of blogger, Sattar Beheshti who died as a result of torture in the custody of the Iranian Cyber Police in 2012.

It should be noted that his lawyer, Arash Keykhosravi, is also currently behind bars after he was arrested on August 14, for filing legal action against the National Task Force Against Coronavirus the Supreme Leader for their mismanagement of the COVID-19 crisis.