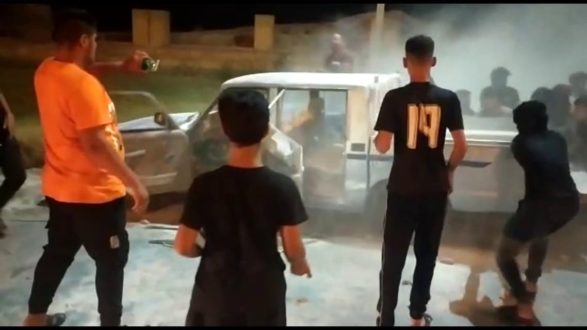 In videos published from the city of Isfahan in central Iran, a large night-time crowd could be heard chanting “Isfahan, Khuzestan, Unity, Unity” while protesters tore down a banner depicting Supreme Leader Ali Khamenei.

Similar slogans were heard in Karaj, the capital of Alborz province. Demonstrators gathered around one of the main bridges chanted “Reza Shah, God bless you” while a group of women gathered in the neighbourhood of Gohardasht called out: “Until the mullahs are shrouded, this country will never be revived.”

Citizens in Fardis, Alborz province also gathered to express their solidarity with the people of Khuzestan and chant the now-ubiquitous “Death to the dictator” and “Security forces, support, support”. Protests also took place in Ivan-Gharb in Ilam, western Iran, and Baharestan.

These protests came a day after hundreds of people marched down Enghelab Avenue in Tehran, calling on Khamenei to “let go of the country” and “Mullahs, get lost”. The march was partially prompted by electricity blackouts, but participants made clear they were also protesting the wider state of goernance in Iran.

Local sources in Ahvaz, the provincial capital of Khuzestan, told IranWire that on Tuesday night the city’s streets and squares were crawling with security forces.

“For the past 12 nights,” a resident told IranWire, “mobile networks and Irancell have been working for a grand total of four to five hours. Only domestic websites are accessible from home – even Google is out of action.” Residents in Shush, Dezful and Khorramshahr also reported being able to connect to Iran’s fledgling “National Information Network”, but not the world wide web.

Last week Ali Shamkhani, secretary of the Supreme National Security Council of Iran, said that all those detained in Khuzestan for non-criminal offences would be released imminently. But the wave of arrests continues, and locals say most of the children and adolescents taken into custody in Ahvaz, Susangerd, Hamidiyeh, Shadegan, Mahshahr, Jarahi, Taleghani and Izeh have not yet come home. Some families have been told to post a bail of $20,000 to get them back.

“Many people don’t even know where their children are,” a local source told IranWire. “We don’t know their status, where they were arrested or what the charges are. They won’t even confirm if a given person is among the detainees or not.”

Khuzestan is a deprived province and most households have no ability to pay such extortionate sums for bail. Meanwhile the governor of Khuzestan, Ghassem Soleimani Dashtaki, followed the example of President Hassan Rouhani by declaring that while some of the protesters’ demands were “right and legitimate”, “Part of the problem was pressure from opponents of the regime. They are behind the scenes, trying to stir up anything they can.”

At least 20 people were rounded up and arrested in the town of Mahdieh, Kermanshah last night after launching their own protest against a lack of water and electricity.

The group had blocked the town’s entrances with burning tires and chanted slogans in solidarity with the protesters in Khuzestan. Human rights organization Hengaw, which has been able to name nine of the 20 citizens, said they had been taken to an unknown location by police. Videos also showed security forces opening fire on demonstrators.

“This area has become completely security-dominated,” a resident of the Derrehdrij neighborhood told Hengaw. “In addition to detaining citizens, the security agencies have ransacked their homes and totally destroyed some of them.”