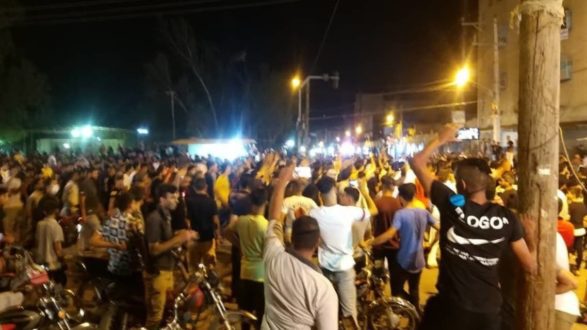 Al-Monitor – On their 12th day, the rallies that initially began in the Iranian oil-rich but underdeveloped province of Khuzestan attracted growing solidarity from across the country.

Videos have gone viral of demonstrations in Tehran, Karaj, Kermanshah, Isfahan and Bushehr, where protesters have been chanting slogans against Iranian Supreme Leader Ayatollah Ali Khamenei, with calls for an end to the clerical ruling establishment. The videos from the city of Kermanshah also showed tense clashes between the two sides with repeated shootings in the background.

In most of the rallies, the protesters also chanted, “No Gaza, no Lebanon, I sacrifice my soul for Iran,” a slogan, that has resurfaced in almost all anti-government protests in Iran since the 2009 post-election unrest. It has served as sharp criticism against the Islamic Republic’s regional policies that have cost Iranian lives and Tehran’s support for militant groups in the Middle East.

According to an Amnesty International tally, at least eight people have been killed in the recent demonstrations that began with anger over mismanagement of water resources in Khuzestan. However, the region’s blistering unemployment, extreme poverty and the state’s political repression against the ethnic Arab population have also help stir up the growing outrage.

Top Iranian officials, including the supreme leader and President Hassan Rouhani, have given limited recognition to the protests in Khuzestan. In the latest, parliament Speaker Mohammad Bagher Ghalibaf said there were “shortcomings and mismanagement” for which “I have no justification.”

Apart from the mass arrests at the site of the rallies, reports have circulated about night raids in which local activists are rounded up, bundled into security vehicles and taken to unknown locations. And on July 27, Iran’s police chief told reporters that “some of the riot leaders have been identified.” In past instances, such protesters have appeared before state TV cameras “confessing” to their links with the enemies of the Islamic Republic.

In response to the fast-growing protests, Iranian authorities have also severely slowed down internet connections in an attempt to block the release of user content material to foreign media outlets.

Reacting to the stifling environment, a group of 50 independent Iranian journalists, in a statement, condemned “the silencing of the legitimate protests in Khuzestan and the media, which are attempting to offer an accurate narrative of the agony.”