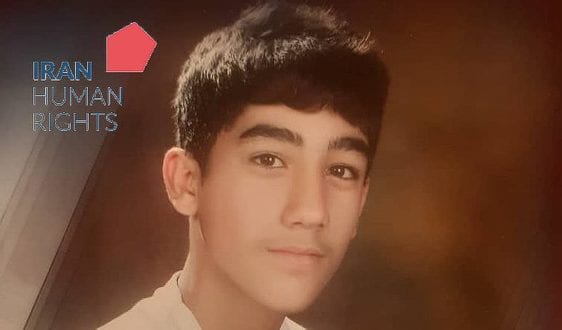 According to information obtained by Iran Human Rights, juvenile offender Ali Arjangi who was due to be executed in July, has managed to pay the diya amount set by the victim’s family today.

Ali Arjangi who was sentenced to death for a murder he is accused of committing at 17, had been given until May 21 to come up with the diya amount set by the victim’s family. The deadline was extended to the end of July after his family failed to raise the set amount. He was hospitalised after attempting to commit suicide on June 12, but was transferred to solitary confinement just two days later.

In January, Ali had told IHR that he was unable to afford the diya as his mother who is a single mother and disabled, had sold their worldly possessions and only managed to raise 20% of the requested amount.

According to the Islamic Penal Code, murder is punished by qisas, where the family of the victim can demand a retribution death sentence. But they can also demand diya (blood money) instead of a death sentence or can simply grant forgiveness.

According to Article 91 of the new Islamic Penal Code, passed in 2013, “In the cases of offences punishable by hadd or qisas, if mature people under eighteen years do not realise the nature of the crime committed or its prohibition, or if there is uncertainty about their full mental development, according to their age, they shall be sentenced to the punishments prescribed in this chapter.” The note to the Article gives judges the power to determine the defendant’s mental capacity: “The court may ask the opinion of forensic medicine or resort to any other method that it sees appropriate in order to establish the full mental development.”

Iran is one of the few countries in the world that still carries out the death penalty for juvenile offenders. The International Covenant on Civil and Political Rights which the Islamic Republic is a signatory to, prohibits the issuance and implementation of the death penalty for crimes committed by an individual below 18 years of age.

The Convention on the Rights of the Child, which the Islamic Republic is also a signatory to, explicitly states that “Neither capital punishment nor life imprisonment without possibility of release shall be imposed for offences committed by persons below eighteen years of age.”

Yet, according to data collected by IHR and international human rights organisations, the Islamic Republic is responsible for more than 70% of all executions of juvenile offenders in the last 30 years. IHR’s statistics also show that at least 63 juvenile offenders have been executed in Iran over the past 10 years, with at least six being executed in 2018 and four in 2019.

Given the security state and repression of civil society activists and the limited contact with prisoners, it is likely that the number of juvenile executions is much higher than recorded.