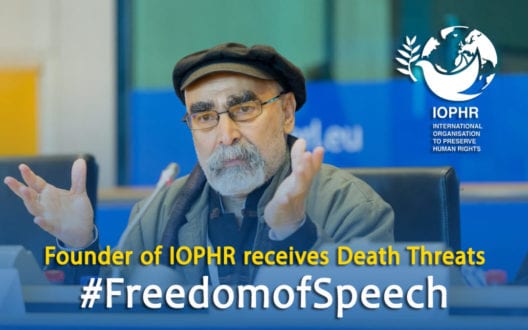 Shabtabnews – At the Weekly IRF Roundtable meeting an IOPHR representative and the chair of the Iran action group at IRF , Hamid Gharagozloo, in his report stated that ” At a time when the regime in Iran is facing insurmountable existential challenges, both at home and abroad, such as the critical negotiations with the U.S. and a presidential election that the people of Iran are intent on boycotting, the atrocities of Khamenei’s regime against the people of Iran continues at an unprecedented and alarming rate.

Theses crimes against humanity are happening in Iran on a constant, daily basis, but what is particularly concerning of late is the death threat issued by a member of the Basij forces named Mansour Amiriyan against Dr. Seyed Azmayesh, the founder of the International Organisation to Preserve Human Rights (IOPHR) and a renowned Sufi master. For more than 20 years, IOPHR has been one of the few reliable sources of news and a voice of the oppressed in Iran. About a week ago, Dr. Azmayesh received a video clip of Mansour Amiriyan loading an automatic rifle while telling Dr. Azmayesh that he must declare his allegiance to the regime-approved leader of the Gonabadi Sufis, indicating that Dr. Azmayesh must submit to the regime and its wishes, or else…

As many of you know, Khamenei’s regime gradually murdered Dr. Noor-Ali Tabandeh, the former spiritual leader of the Gonabadi Sufis, over the course of a two-year house arrest by administering incorrect medications and unknown drugs to him, in order to take over the Gonabadi Sufi order.

The fact of the matter is that Khamenei and his regime are incapable of reform and cannot be trusted. The past 42 years have proven that one can only negotiate with this regime from a position of strength, and history has repeatedly taught us that appeasing tyrants leads to horrific consequences on a global scale. “

For full text of report see below link: