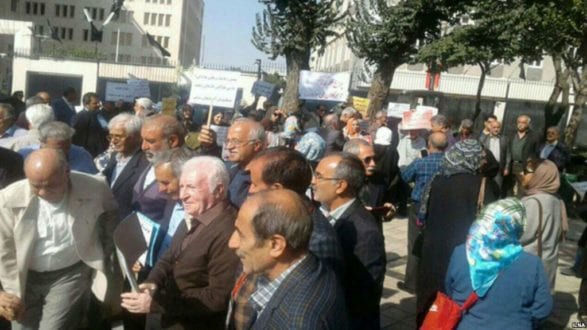 May 1, 2021 Health and Hygiene, Human rights, Social and Political

Radiozmaneh – On the occasion of International Workers’ Day, Zamaneh Media has published its annual labor report, which covers issues related to workers’ rights in Iran from May 2020 to May 2021. Over the past year, despite the coronavirus pandemic and police crackdown, workers took to the streets many times chanting slogans against exploitation, poverty, unemployment, and lack of social support. They consisted of industrial workers, teachers, nurses, job seekers, peddlers, seasonal workers, and farmers.

HRANA, a body of human rights activists, has registered 23,873 protest rallies in the Persian calendar year 1399. Of this number, 16,741 were workers’ actions, which took the form of either strikes or rallies at the workplace or in front of government buildings and the parliament.

Job insecurity, inadequate wages, long delays in payment, and harsh working conditions were among the main causes of labor unrest over the past year.

Over the past year, Iranian nurses have been protesting, calling for salary increases, the dismantling of contractor system that allocate very low wages to nurses, and hiring of new nurses to combat the pandemic that has hit nurse hard. According to union officials, 80,000 nurses became infected with the coronavirus. 8,000 of these nurses could not return to work due to severe illness. In 14 months, from the beginning of the outbreak to the end of the Iranian calendar year 1399 (March 20, 2021), 110 nurses, including two pregnant nurses, died of coronavirus.

As Covid-19 arrived in Iran and caused for waves in Iran last year, more and more workers lost their jobs or are working at reduced hours and paid at reduced rates. Many have also lost their lives (61,649 people died of coronavirus by the end of March 2021).

Iran has not produced any vaccines or has not made imported vaccine widely and publically available to front-line workers and other workers. In February 2021, the Ministry of Health invited drug importing companies to import vaccines at the open market exchange rate to be sold privately. The government’s inability to control the pandemic in an economy already plagued by sanctions and widespread corruption has made the economic situation even worse for workers who cannot afford the privately sold vaccine.

The rial, the national currency, lost more than half of its value, and at one point in the year, the dollar exchange rate reached over 30,000 tomans (300,000 rials). The defeat of Donald Trump in the US presidential election, and the possibility of reducing sanctions in the early months of 2021, caused a relative decrease in the dollar exchange rate to about 22,000 tomans.

Under the pretext of controlling the foreign exchange market, the government stopped allocating foreign currency at preferential rates to certain commodities, including food and medicine. This policy led to an increase in the price of goods, especially food, and the scarcity of some pharmaceutical items, such that the point inflation rate, which indicates the rate of increase in the price of goods compared to the same period a year earlier, in March 2021 rose to 48.8% and the inflation rate for food and beverage reached 67%.

Rising food prices have made the household basket smaller than last year. Some food items, including those with proteins, were removed from the basket. Earlier, while the subsistence basket was estimated at 4,965,000 tomans, the Supreme Labor Council (SLC) set the minimum wage for 2020 at 1,835,000 tomans. As in previous years, this figure was imposed on the workers without the consent of their representatives at the SLC (these representatives are ironically elected by government-affiliated organizations). Workers’ complaints about wage suppression were unsuccessful. Despite a ruling by the Administrative Court of Justice in their favor, the government and employers refused to adjust wages until the end of the year.

Different statistics have been published on the number of people who lost their jobs in the past year. In the first months of the pandemic, the Parliamentary Research Center estimated that 3.2 million to 6 million jobs would be lost. In March 2021, the Secretary-General of the Chamber of Trade announced that the increase in red alert zones would eliminate three million jobs. In August 2020, the Deputy Minister of Industry, Trade, and Mines announced that the number of people who had registered for unemployment benefits was 1.7 million.

The closure of small workshops, restaurants, and a large portion of service jobs, in the absence of government social and financial support, increased the number of people employed in “informal” jobs, especially peddling. Municipalities used the pandemic as an opportunity to put pressure on vendors. Peddling was banned on the busy streets of major cities including in Tehran, Sanandaj, Tabriz, Qazvin, Bandar Abbas, Yazd, Shiraz, Isfahan, and Ahvaz.

The government’s promise to cover living expenses and pay unemployment insurance to the unemployed in 2020 was limited to the distribution of small food packages, minimal banking facilities, and the payment of unemployment benefits to only 670,000 of the total unemployed.

Migrant worker’s lives in Iran have become more difficult due to rising inflation, the recession, and the coronavirus pandemic. Financial support, although limited, did not go to immigrants. Although officials from the Islamic Republic, after meeting with Afghan officials, announced that “legal” migrants would be treated free of charge if they contracted the coronavirus, medical services did not include a large proportion of migrants who did not have a residence card. They were forced to leave Iran. Afghan officials announced in February 2021 that in the past year 500,000 Afghans had “voluntarily” left Iran. 150,000 of these migrants were forcibly returned to Afghanistan by Islamic Republic officials.

In the last three years, Zamaneh has published 16 labor newsletters, three special reports (on teachers, oil industry contract workers, and workers’ wage repression), and two annual reports. This is the third Zamaneh annual labor report, which covers issues related to workers’ rights from May 2020 to May 2021.