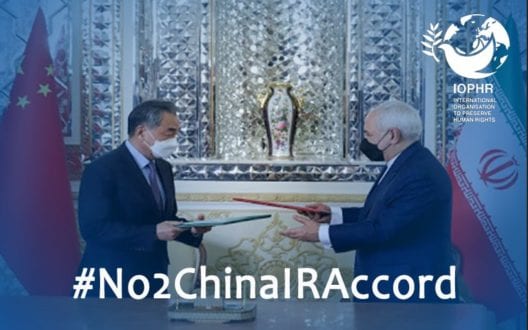 Shabtabnews – In a statement IOPHR urged the need to immediately terminate the infamous agreement between the Iranian regime and the Chinese government.

The statemented also noted that: “An examination of similar investment cases in some countries about which information has been published, such as Ecuador, show that the Chinese are deliberately investing in projects that are deemed to be unprofitable by expert. So that when these projects fail the governments of these countries will be forced to cede their natural resources to China in exchange for their inability to repay the loans.

Thus, it can be concluded that the insistence of the Chinese government officials not to disclose the provisions of the agreement between Iran and China is due to their fear of revealing a plan that they have devised to seize the rich resources of the Iranian people. Also as noted, the Chinese government by bribing corrupt officials in low-transparency countries, forces them to sign long-term, high-interest credit agreements, and then on the maturity of these loans and the inability of governments to repay their debts, the Chinese government takes over the country’s assets.

In addition to the above points, studies show that the Chinese Communist Party, in the form of an adventurous project called One Belt-One Road, seeks to establish a great Chinese hegemony in the Eurasian region, by taking over all land and sea transportation routes in this region.”