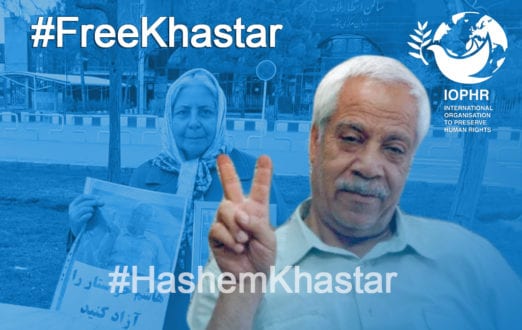 Shabtabnews – IOPHR issued a statement regarding the Dire Health Condition of Teachers’ Rights Activist Mr. Hashem Khastar. The statement declared: “Once again, the IOPHR would like to draw the attention of all international organisations to the plight of prisoners of conscience and political prisoners in Iranian prisons, especially Mr. Hashem Khastar – the imprisoned teacher and activist, who has sadly spent large part of his life since 2004 in the prisons of the Islamic Republic of Iran, due to his human rights activities.”

The statement ended with stating that “given Mr. Khastar’s fragile health, it is impossible for him to bear this type of unjust punishment any longer, especially in the face of old age and illness. Therefore, he should be released from prison immediately and unconditionally.

Additionally, it should be obvious to all, that the officials of the Islamic Republic of Iran are solely responsible for the consequences of any unfortunate incident that befalls Mr. Khastar, while inside the Iranian prison system.”

For the full text of the statement see below link: