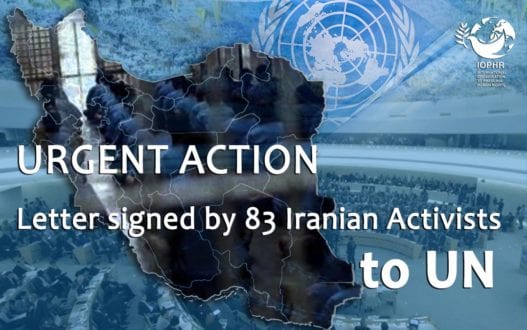 The urgent request of a group of Iranian civil, political and human rights activists to the President and members of the UN Human Rights Council

Shabtabnews – A group of of Iranian civil, political and human rights activists have written a letter to the President and members of the UN Human Rights Council urging them to immediately address the dire situation of political and ideological prisoners in the prisons of the Islamic Republic of Iran.

The letter states that “it should be abundantly clear is that the Iranian Regime has systemically placed unbearable pressures on different groups of the Iranian people, such as: Women, ethnic, religious, and all minorities, the latest example of which is the killing of Baluch minorities in the Sunni region of Sistan and Baluchistan, as well as the continuous killing of Kurdish citizens who barely make a living. Sadly, it also seems that the human rights situation in Iran has worsened considerably since the massacre of 1500 or more innocent protestors during November 2019 protests. As the regime has now placed even more pressure on the activists and political prisoners. The way the Regime deals with these groups is much worse than the way it deals with other defendants, and consequently all human rights organisations should pay even more attention to the plight of political prisoners!”

It also states “Political prisoners in Iran are facing arbitrary and offensive detentions, long-term house arrests, so-called arbitrary killings, illegal trials and illegal verdicts by the revolutionary courts without due process of law; and shameful ill-treatment of political and ideological prisoners convicted by the these illegal courts, all of which are very shocking!”

The letter which is signed by 81 human rights activists also provides a sample list of the harsh treatments faced by political prisoners in Iran.