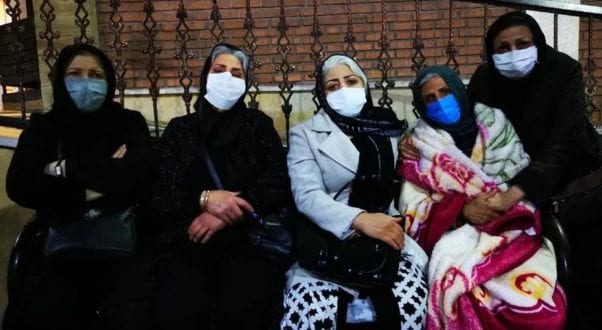 Iranwire – It’s just a picture. A picture of five mothers together in the courtyard of Loghman Hospital, counting the last seconds of the life of Behnam Mahjoubi, a dervish who died on a ventilator after eight months of torture in prison. Among the five mothers, the latest pain is in the heart of Batoul Hosseini, wrapped in a blanket, weeping in the arms of the others: “Why did they take my baby away from me?”

In this one photograph is the narrative of more than four decades of oppression, murder and execution; from the mothers of Khavaran whose lawsuit did not see the light of day, to all the flag-bearing mothers around the world seeking justice.

On February 16, 2021, at 10.30pm, in the courtyard of Tehran’s Loghman Hospital, where Behnam Mahjoubi’s lifeless body was attached to a device, Batoul Hosseini sat on a bench and said five times in 30 seconds: “I want to see my child.”

But Hosseini was not allowed to go to her son’s bedside. The night ends with a longing for the meeting, and when the sun rises a group of companions arrives and embraces Hosseini. Mustafa’s mother, Pouya’s mother, Ebrahim’s mother and Saeed’s mother, on behalf of all the grieving mothers, hug Behnam’s mother and shed tears with her. History seems to be repeating itself: generations of children who have been killed and mothers who carry the banner of litigation and justice weep over each other’s grief.

The oldest grieving mother among them is Saeed’s mother. Saeed Zeinali was arrested at his home five days after the raid on the University of Tehran dormitory in July 1999. Security forces attacked the dormitory and killed Ezzat Ebrahimnejad, injuring and imprisoning several other students. Saeed’s mother has been looking for her son for 20 years and has not received any response.

Mustafa’s mother, Shahnaz Akmali, hugs Behnam’s mother on the bench of Loghman Hospital, closing her eyes, her face is wet with tears. A decade after Zeinali’s disappearance, on Ashura Day, December 27, 2009, Mustafa Karimbeigi was shot in the head during the Green Movement. The Green Movement was formed to protest against the presidential election of 2009, but it went as far as to demand the removal of revolutionary rule and suffered heavy casualties.

Pouya’s mother, Nahid Shirbisheh hugs Behnam’s mother with eyes red with tears and a face torn by pain. Pouya Bakhtiari participated in the November 2019 protests with her mother. The protests were sparked by rising gasoline prices and quickly spread to various Iranian cities, but were quickly suppressed. On November 16 a flood of people shouted, “I will kill, I will kill, the one who killed my brother.” The crowd was holding the body of Pouya with a bloody face. That is his mother’s last image of him as she shouted after him: “My son, my son.”

Ebrahim’s mother, Sakineh Ahmadi, also joined the grieving mothers in the courtyard of the hospital, crying and saying, “Today was my son’s birthday.” The same night Bakhtiari was killed, Ebrahim Katabdar was shot in the heart while was standing in front of his office. Ebrahim was taken to hospital after being shot, but he was dead by the time his mother arrived.

Ebrahim’s mother had taken her two young grandchildren to their father’s grave before coming to the courtyard to hug Behnam’s mother. She tells IranWire: “I wished to hug my son, kiss him and tell his children, who keep saying ‘we want our father,’ here is your father. At his tomb, the children said, ‘Why are you bringing us to the tomb and to this black stone?’ What should I tell them? What should I say to a four-year-old child? I say the government killed your father. They ask because of what sin? What answer should I give? My son was killed innocently.”

“We, the moms, feel a little better when we see each other,” she says through sobs. “I want those who killed my son to be tried. We grieving mothers stand together. We don’t want innocent young people to be killed any more. This law and the government oppress the youth of the people. We don’t want other mothers to go through the same fate.”

This is why they talk about “litigation”, as Pouya’s mother explains to IranWire: “We grieving mothers, with this common pain, have a better understanding of each other. We are like an association – a joint group of plaintiffs with one voice. Litigation is the voice of oppression; the same thing that has been going on for years. This common understanding is imposed on the bereaved mothers. We demand a fair trial for the perpetrators of these atrocities. We have come to Loghman Hospital to tell Behnam’s mother that we have suffered the same pain as her; we are like her and we know what she has gone through. When my son was killed, other grieving mothers came to me to sympathize. I didn’t realize the importance of this presence that day. Maybe Behnam’s mother won’t understand today. But now I know how effective this sympathy and unanimity was. I felt that if others affected me by sharing their pain, I too could be effective for Behnam’s mother.”

Mustafa’s mother uses similar terms to describe this solidarity. She tells IranWire: “Shared pain brings people together and gives them strength. Its other effect is the advancement of prosecution. Even now, not all grieving mothers cry out and they may be silent, but their silence doesn’t mean that they aren’t righteous. For us, litigation, along with prosecuting the perpetrators of these crimes, is a stand against forgetfulness; an attempt to prevent a recurrence of this tragedy. The point of litigation is that we don’t want other mothers to mourn like us: mothers whose children were killed with guns, on the gallows, on the street or in prison, like Behnam’s mother. When I was imprisoned, I told them to execute me, I am seeking justice for my son’s blood. No one can tell me or tell us to be silent. The flag of seeking justice has been raised by Khavaran mothers since the 1980s, and mothers are still the flag-bearers of litigation.”

She is referring to the execution of thousands of opponents of the Islamic Republic of Iran in the 1980s. The summer of 1988 was the culmination of these executions. Many political prisoners were executed on the orders of Ruhollah Khomeini and were buried in mass graves in Khavaran Cemetery. This led to the name “Khavaran Mothers”: mothers who neither saw the bodies of their children nor found any sign of their graves.

Khavaran soil has seen many grieving mothers. On the first day of each month those who are still alive visit the stoneless graves of their children and renew their covenant to seek justice for their children’s blood, pruning tulip and rose branches in the bushes. When they first came to the cemetery in the 1980s the bereaved mothers clung to the ground in the hope of embracing their children for a last farewell.

The Islamic Republic has been established in Iran for more than four decades, and each decade has left its mark on mothers, from Khavaran to the Chain Murders (killings of dissidents and opponents of the Islamic Republic in the 1990s by agents of the Ministry of Intelligence), to the dormitory of Tehran University and the massacres of 2009 and November 2019, and now Behnam Mahjoubi, who died under torture like Sattar Beheshti.

Sattar was a worker and a blogger who was arrested in November 2012 for his activities in cyberspace and transferred to an unknown location. He died under torture. Gohar Eshghi, Sattar’s mother, has repeatedly spoken about seeking justice with a picture of her child in her hand. Although it has been three decades since Khavaran, and many mothers have joined their children, their flag of litigation has been passed from mother to mother.

The grieving Iranian mothers feel a spirit of solidarity with similar groups in other repressive countries. “Mothers of Argentina” or “Mayo Square Mothers” are women who have been protesting the disappearance of their children since 1977 – young people who disappeared or were killed between 1976 and 1983 in the “Dirty War” waged by Argentina’s dictatorship.

They launched a lawsuit in a situation where they had no power, and the Argentinian judiciary gave no answers to their questions. For more than three decades these mothers have continued pursuing their case and have received worldwide attention. However, some of them have been imprisoned in search of their children.

“None of these mothers on either side of the world have any confidence in their government and their rulers,” says Paolo Butta, a researcher on Iran-Latin America relations in Argentina. “If the citizens of a country don’t trust their government, what is the role of government officials? These mothers need answers to their questions. They haven’t joined any political movement. In a civil movement, they are just looking for answers.”

Similarly the “White Women of Cuba” are the mothers and wives of political prisoners who have regularly protested against their plight.  “All of these women have a specific goal,” says Ruben Parades Rodriguez, a professor at the National University of Rosario in Argentina. “Their goal is to end the difficult situation that their families are facing and that of victims of their country’s political regimes.”

Parvaneh Milani sang for the mothers of Khavaran:

No one can bear this common pain except the grieving mothers who, for decades, have carried the grief of the world and have stood still until the day of judgment.