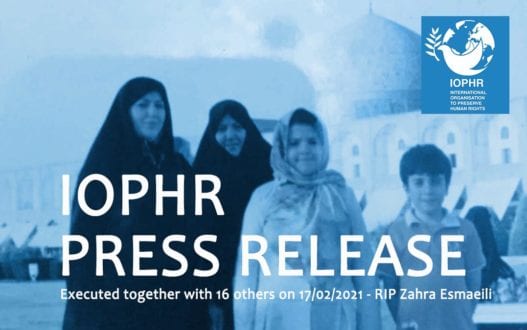 IOPHR’s Statement in connection with the execution of Ms. Zahra Ismaili and sixteen other prisoners in Iran

Shabtabnews – In a statement IOPHR strongly condemned the execution of the innocent prisoner Ms. Zahra Esmaeili and 16 other prisoners in Rajai Shahr Prison in Karaj, on the 17th February 2021.

The statement also declared that Zahra Esmaeili suffered a cardiac arrest and died in a state of shock, after seeing the execution of 16 other men who had been executed before her eyes. Despite this, the execution of Ms. Esmaeili’s proceeded and her lifeless body was hanged.

Accordingly, the IOPHR once again drew the attention of all human rights activists, and the international community to the rampant and increasing rapid number of executions in Iran, and calls on all democratic governments to put pressure on the Iranian Regime by suspending their political, economic and diplomatic relations with the ruling regime in Iran, until the Iranian regime puts an end to its executions of its innocent citizens.