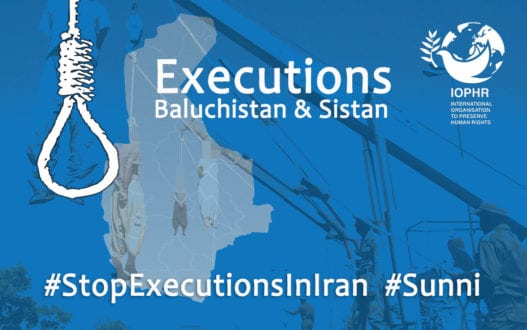 IOPHR Statement on the Unrestrained Execution of Sunni Prisoners

Shabtabnews – In a statement IOPHR condemned the recent Unrestrained Execution of Sunni Prisoners .

IOPHR in the statement stated: “The executions took place, despite the fact that all the judicial officials of the province were aware of filing of request for retrial. Yet, all three people were hastily executed on Sunday in order to avoid the possibility of postponing or suspension of the sentences.”

IOPHR also warned ” that the pursuit of religious apartheid by the ruling regime in Iran will undoubtedly pose a risk of religious clashes even outside Iran.” It also pointed out “that the current policy engagement and trade towards ruling regime in Iran has been tested for many years without any sign that the Iranian Regime will ever change its inhuman policy towards its own citizens and protect the principles of human dignity. Therefore, IOPHR asks all international bodies to take a different approach to engaging with Iran, one that puts human rights as the primary principle of any engagement with Iran. As only through such an approach one can be assure of peace and stability in Iran and the surrounding regions. “

For full text see below link: