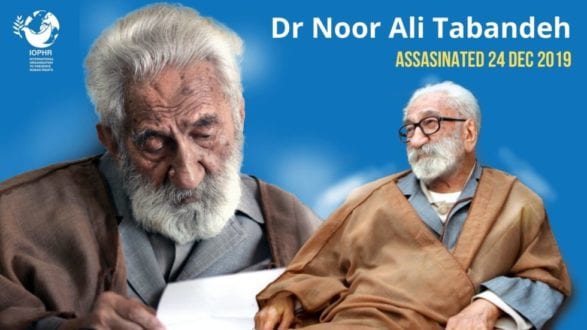 shabtabnews – On the one year anniversary of death of Dr Noor Ali Tabendeh IOPHR put out a statement commemorating the human right’s record of Dr Tabandeh. Dr. Tabandeh was a prominent Jurist, an expert in Islam, a freedom fighter, a mystic and the spiritual leader of eight million Gonabadi Sufis in Iran and around the world. He is widely remembered as the Father of Human Rights in Iran, as for Dr. Tabandeh, human rights was always at the centre of his beliefs!

During Dr. Noor Ali Tabandeh’s last 2-years of his life he was forced into house arrest, and was barred from speaking, and nobody was allowed to visit him. All affairs related to him were carried out by four government agents who were Sufis in name only and used their position to forge fake statements in Dr. Tabandeh’s name in order to spread false news and misinformation.

Finally, on the 24th December 2019, as a result of the conspiracies of the group of four members, and the medical team, this great human rights defender fell victim to one of the greatest human rights violations committed by the Iranian regime.

For full statement see below link: