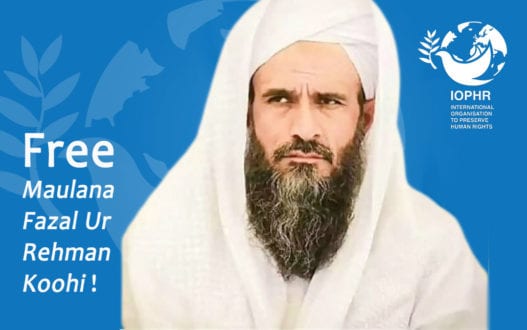 Shabtabnews – In a new statement IOPHR condemned: “The continuing and unacceptable violation of the rights of Iranian Sunni citizens and the demand for the immediate release of Maulana Fazlur Rehman Koohi.”

The statement also in regards to the Iranian regime’s relations with other Muslim countries stated that while the” Iranian regime’s warmest relations with the Taliban and ISIS elements, and do not hide these relations, many Sunni mosques and places of worship in Iran are destroyed, or closed under the pretext of confronting Salafism. In this regard, recently an official of Zahedan, the largest Sunni city in Iran, has officially requested that the Maki Mosque in Zahedan, which some believe is the largest Sunni mosque in the world, to be demolished on the pretext of its resemblance to the Hagia Sophia in Istanbul.”

IOPHR also called for the “immediate and unconditional release of Maulana Fazal Ur Rehman Koohi, calls the attention of all international bodies, especially the European Union foreign policy apparatus, to the plight of Iran’s Sunni community, in the hope that such international bodies exert their influence on the Iranian regime to change its behaviour.”